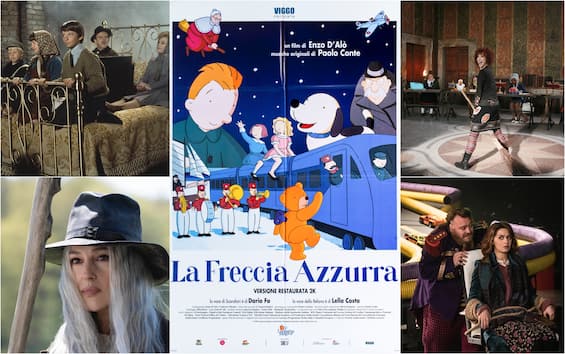 Every year on the night between January 5th and 6th, tradition has it that an old lady riding a broom brings sweets and gifts to good children. The figure of the Befana has inspired stories but also various films, for cinema and television, which have portrayed her in many different ways: courageous, funny, with a tender heart. Here are which ones to see or review in the family.

The protagonist of the film Bedknobs and broomsticks she’s not exactly the Befana, but she’s still a lady of a certain age who – on certain occasions – flies on a broom. The protagonist of this beloved film is Miss Eglantine Price, played by Angela Lansbury, an apprentice witch who in 1940 welcomes little Paul, Carrie and Charlie into her home, who have been removed from London due to the German bombing. The four soon forge a deep bond and embark on fantastic journeys aboard a bed which, thanks to a magical brass knob, is able to transport them wherever they want. Against the background of the Second World War, the group, thanks to magic but also to the help of Mr. Emelius Browne, manages to thwart a German attack that began with a landing on the English coast.

The Blue Arrow is an animated film inspired by the 1964 novel of the same name by Gianni Rodari. Set in Orbetello, it tells the story of the evil doctor Scarafoni, assistant in the shop owned by the Befana, who – shortly before the night between 5 and 6 January – manages to put the old woman out of the game and take over the management of gifts to bring to the children, imposing a payment on anyone who wants a gift. Francesco is also paying the price, a poor child who would love to see the Freccia Azzurra, a little train that he saw in the shop window of the Epiphany. But not everything goes as Scarafoni has planned. The toys in the shop, endowed with a life of their own, decide to rebel and, led by the stuffed dog Spicciola, escape from the shop. From that moment an adventure begins which sees the return of the Befana to the track and, in the end, a new opportunity for little Francesco.

In this television film, Veronica Pivetti plays Beniamina Volò, great-granddaughter of a Befana from the past who decides to face the selection to become the new Befana. After winning, it’s time to deliver the gifts to the children, but Beniamina has to face some unexpected events related to her role, first of all that of having become invisible to adults. Meanwhile, two bad guys blackmail the Draghi family by holding their dog hostage. What will Beniamina do?

Beniamina Volò then returns in the sequel to Miacarabefana.itby title SOS Epiphany. This time she is grappling with the witch Coccarda SenzaSogni, who intends to conquer the world by stealing children’s dreams. The family also enters the story made up of grandfather Pietro, owner of a bookstore, little Carlotta and mother Francesca, recently widowed: they are the ones who help Beniamina to defeat the wicked witch and deliver the gifts on time in the night between the 5th and on January 6th.

From one Italian witch to another. The protagonist of this film is Paola (Paola Cortellesi), an elementary school teacher with a double life: if she teaches the children during the day, at night she transforms into the Befana. When she is kidnapped by Mr. Johnny, a mysterious toy maker, some of her little pupils discover her secret and do everything to save her.

The Befana comes at night has its prequel, The Befana comes at night II – The origins, with a completely new cast that sees – among others – Monica Bellucci, Corrado Guzzanti and Fabio De Luigi. The protagonist is a little girl, Paola, who discovers a very dangerous secret for the ambitions of Baron De Michelis. Protecting her from her is the white-haired good witch Dolores, who sees something good in her and, who knows, maybe a destiny riding a broom.