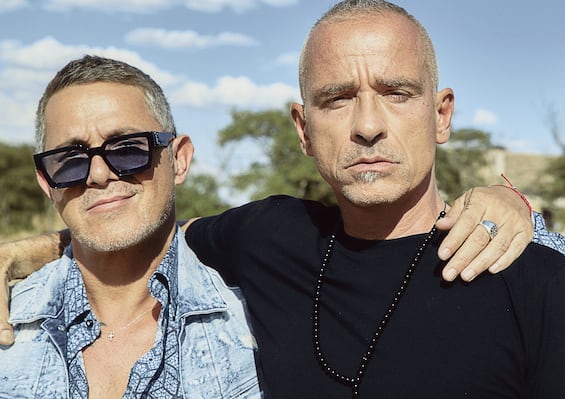 A few weeks after the departure of the World Tour Première to Seville, Eros Ramazzotti is ready to conquer the world audience with the new single I’m with Alejandro Sanz landed on all digital platforms and on radio, second track from the album Infinite Beat outgoing on September 16 for Capitol Records Italy under license Vertigo / Eventim Live Internationalalready available for pre-order. This is where two giants of international music, together they matter 120,000 million records sold, they decided to combine their unique talents. There very warm voice of Sanzthe Spanish artist with the highest number of Grammy Awards, with a total of 4 and 25 Latin Grammys, joins the unmistakable stamp of Eros, for an invitation to believe in your dreams without being knocked down or conditioned by the changes and ups and downs that life presents to us. Sometimes it takes very little to recover from moments of difficulty: old friends and the power of memories can help us find ourselves, “I am what I am / my soul, new music, but my old friends ”.

At the same time as the release of the single, the official video clip is available on YouTube directed by Adrián Egeafrom an idea of Eros Ramazzotti And Sergio Pappalettera. The movie is a real blast from the past with two very young protagonists Alejandro and Eros who, as children, chase a ball, just like chasing a dream, with the lightheartedness that only childhood retains. Thus traveling a long time line, we are transported into the present: two mature and successful men, who sing about life and its unstable beauty without ever forgetting their origins. For the occasion, the new single will see a special première on Telemundo: one of the world’s leading Spanish-language broadcasters will dedicate one exclusive space in its flagship programs which will reach over 100 markets over the air, cable and satellite.

The single I’m with Alejandro Sanzas well as Lovesthe disc Infinit beat and the historical passages that contributed to the success of Eroswill make up the lineup of the World Tour Première he was born in Infinite Beat World Tourthe fantastic live adventure with which Ramazzotti has decided to celebrate together with its large audience this new recording journey for the first time live, produced by Radioramahistoric structure of Eros coordinated by Gaetano PuglisiAnd organized by Vertigoan international group company CTS Eventim. After the premiere in Seville, Agrigento, Verona, Athens and Caesarea, the world tour will start on October 30, 2022 from Los Angeles landing in the majestic setting of Microsoft Theater, to then arrive in Europe from February to May 2023 with 10 Italian dates.

The pre-orders of Infinite Beat they are available in all countries of the world and tickets for the Infinite Beat World Tour are for sale on the site www.ramazzotti.com And www.vertigo.co.it.

The radio partner of World Tour Première he was born in Infinite Beat World Tour is Radio Italia. Neos, the second Italian airline of Alpitour World, is the official carrier.