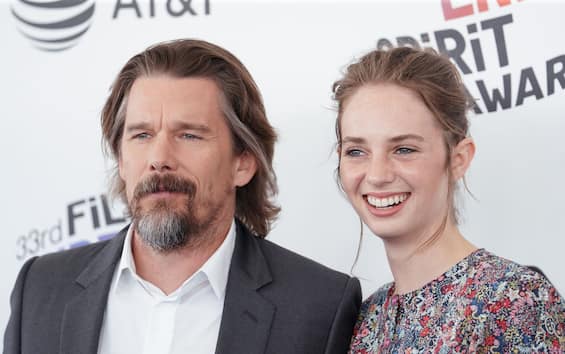 Maya Hawke, daughter of art of Ethan Hawke and Uma Thurman, has made a name for itself as an actress recently. The general public noticed her for her role in the TV series Stranger Things, but then her career continued allowing her to gain experience on the set of various interesting projects. Her relationship with her parents has often seemed very accomplice and affectionate on social media and Ethan Hawke has now involved her in his next project, the film Wildcat. In fact, some videos and photos of him during the shooting of the film in Kentucky have been published on the web.

Maya Hawke plays the famous writer Flannery O’Connor in the movie Wildcat and in the contents shared on the web, the actress can be seen with the make up and clothes of the character, including the walking crutches that the real O’Connor had to use at one point in her life. Indeed Flannery O’Connor suffered from serious health problems due to a diagnosis of lupus, a disease that led to the death of her before her father when she was only 16 years old. Day-to-day mobility issues led her to stay on the family farm to write and her stories often revolve around disabled people, a world she knew well. Her work was also influenced by her Irish Catholic faith making her a cornerstone of Southern Gothic literature.

Father and daughter together on set

Filming will take place between January and February Wildcatmainly set in the 50s, the period in which most of O’Connor’s life took place. Maya Hawke is a rising star, like Lily-Rose Depp and Margaret Qualley, daughters of art who are emerging in the current Hollywood industry with talent and intelligence. “You have to keep working and do a good job. If you do a bad job, the chances will stop. That’s my philosophy,” Maya Hawke said in a recent interview. As did Jamie Lee Curtis, daughter of the star of Psychor Janet Leigh and Tony Curtis, or recently Dakota Johnson, daughter of Melanie Griffith and Don Johnson, Maya is also trying to stand out proving to be worthy or better than their parents, but still to have their own personality and personal talent.