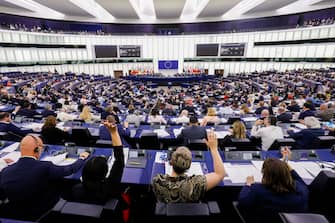 It had been discussed for some time, now the green light has come from the European Parliament: stop at the sale of new ones petrol, diesel and lpg vehicles from 2035. The measure is part of the package Fit for 55a European program that aims to reduce the production of emissions by 55% by 2030 and eliminate them by 2050

WATCH THE VIDEO: EU, stop production of petrol cars from 2035

Approved the amendment extending the derogation to the European rules on emission standards of carbon dioxide from which the small businesses which produce from one thousand to 10 thousand cars and from one thousand to 22 thousand vans a year, in an attempt to limit the economic impacts of the new more restrictive rules

The amendment was not enough to avoid the almost general raising of shields against the provision, starting with that of theAnfia – National Association of the Automotive Industry – which speaks of “70 thousand jobs at risk in the automotive industry linked to the production of components that will not be used for electricity ”

EU, European Parliament vote on the Fit for 55 environment package: what changes

According to Gianmarco Giorda, director general of the association, “the electricity sector today is not able to compensate for the loss of jobs, it is not enough to build charging stations or other components. Rather, they are useful actions to bring pieces of production chain related to the production of batteries for electric cars”

Petrol, the price goes up again: how to receive a 200 euro bonus

Another alarm comes from the Italian city symbol par excellence of the automotive industry: Turin. Talk about a “very hard blow“For the automotive sector Giorgio Marsiaj, president ofIndustrial Union of the Piedmontese capital

Dear gasoline, how could the government intervene

“The vote of the European Parliament that bans thermal engines from 2035 – says Masiaj – reiterates a ‘ideological approach in favor of the electric and puts the Italian and continental automotive supply chain at serious risk. A choice, that of the European parliamentarians, which does not take into consideration a fundamental and strategic productive sector for the European economies and which puts 70 thousand jobs in serious danger, as Anfia points out and as we have been reiterating for some time ”

For Marsiaj “the dutiful and shared respect for the environment” cannot and must not “compromise the future of the automotive industry: the total and too hasty elimination of internal combustion engineseven with alternative fuels, is a preconceived way of dealing with the issue ”

Also Acea – European association of automobile manufacturers – collects the concern of the industrial sector for the vote of the European Parliament, because “the transformation of the sector depends on many external factors that are not completely in its hands”

“Given the volatility and uncertainty we are experiencing on a day-to-day basis globally, any long-term regulation beyond this decade is premature at this early stage. On the contrary, one is needed transparent review halfway to defining the post-2030 objectives “, Acea said in a note, urging the EU institutions to” consider all the uncertainties that the sector must face, while preparing for a massive industrial transformation”

THE labor unions Meanwhile, Italians are asking the government to open a discussion table. Ferdinando Uliano, national secretary Fimsays it is “essential not to waste any more time in front of one epochal transition which puts at risk, if not governed, over 75,000 jobs in our country ”

Simone Marinelli, national automotive coordinator for Fiom-Cgilasks that “start immediately with the confrontation between the government, trade unions and businesses. The silence of the government is now unsustainable and cannot be explained when the unions and the business system together are asking and urging the opening of a specific table with the presidency of the council and the competent ministers ”

Out of the core CGIL Piedmont. The secretary general Giorgio Airaudo invited “the Italian industrial system linked to the production of endothermic products not to miss the opportunity and to adapt by exploiting theopportunity to innovate“. It is useless – according to Airaudo -” to make the last of the old production process “. Instead, it is better to” take advantage of technological leapwithout leaving anyone behind ”