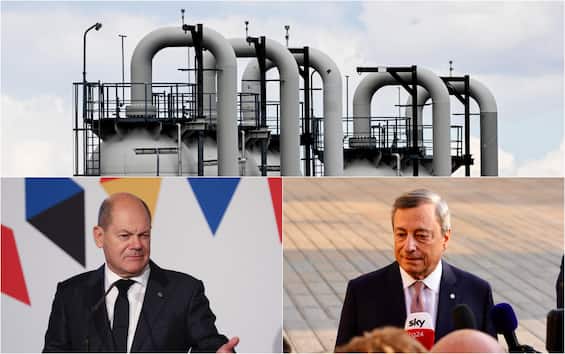 On energy, “things are moving in Europe”: this is said by the outgoing Italian premier Mario Draghi, in Prague for the informal summit of the leaders of the EU countries. According to the former governor of the ECB, “the Commission will present a proposal to the Council on 19 October” to “try to reduce prices, have an element of solidarity in the mechanism and start the reform of the electricity market”. The question of the gas price cap remains on the table: according to the President of the European Commission Ursula von der Leyen “the Member States want to discuss now” the measure, and “I trust that a solution can be found”. But the optimism does not seem shared by the German Chancellor Olaf Scholz: “Any intervention aimed at” gas “prices on the market automatically raises questions about the security of supply, so we must discuss these things very carefully”.

Von der Leyen: “We talk about price caps but today we can’t decide”

The leader of the European Commission opened the day in Prague: “Now it’s time to discuss how to limit peaks in energy prices and Putin’s manipulation. The second important thing to discuss is the level playing field. that is, that companies in every country have the same opportunity to participate in the single market, with equity. The third point is RePower, and how to strengthen it. There will be no decisions today, being an informal Council but it is in preparation for the October Council ” . On the subject of imposing a price cap on gas for some time, Von der Leyen underlined how “the Commission had proposed a gas cap in March but at the time it was not attractive. But now the situation has evolved and the Member States want to discuss the price cap now. I trust that a solution can be found ”.

Draghi: “Things about energy are moving”

At the end of the informal summit, the outgoing Prime Minister Mario Draghi also spoke: “On energy, things are moving. The Commission will present to the Council on 19 October a proposal in which the three elements – groped to reduce prices , have an element of solidarity in the mechanism and an initiation of the reform of the electricity market – there will be “. The premier specified that “we have not talked much about the issues, also because between now and 19 October the Czech presidency will convene as many energy councils as are necessary for a concrete proposal. So said the Czech presidency, no longer vague proposals but something more concrete and perhaps already proposals for regulation “. The premier then made it known that he was” in agreement with the proposal of Gentiloni and Breton. There were also 5 similar proposals -6 months ago. It is a very natural proposal, especially after the German decision. It is what it takes to put all countries, both those that have fiscal space and those that do not, on an equal level “.

However, it was Germany who pulled the handbrake on the price cap: German Chancellor Olaf Scholz said that “any intervention aimed at” gas “prices on the market automatically raises questions about security of supply, so we need to discuss these. things very carefully. “The German leader added that” we all agree that gas prices are too high and we must discuss with Norway, the United States, Japan and Korea on how to lower them. “Scholz then stressed that plans “similar” to the 200 billion euro aid shield launched by Berlin “are also planned elsewhere or already implemented, for example in Italy, Spain, France, the Netherlands”.

At the end of the summit, the president of the EU Commission Ursula von der Leyen spoke again: “After seven months since the beginning of the war, we are much better prepared for the winter” on the energy front. “Our stocks are 90% today, 15% more than last year.” There is also great support among EU leaders on the fact that after the spring it is crucial to arrive at joint purchases of gas, to have a common purchasing power, and “we must protect our single market and avoid fragmentation and on this there is a common vision, ”said Von der Leyen.

Meanwhile, French President Emmanuel Macron has made it known that the EU will activate “mechanisms” of “financial solidarity” for energy. The heads of government of Spain and Portugal, Pedro Sánchez and Antonio Costa, will hold a meeting in Paris with Macron, to address the discourse of energy “interconnections”: this was confirmed by the Spanish Prime Minister, Pedro Sánchez, in a press conference from Prague. According to the Spanish Prime Minister, the meeting will be held before the next European Council and will discuss gas and hydrogen pipelines, as well as electrical connections.