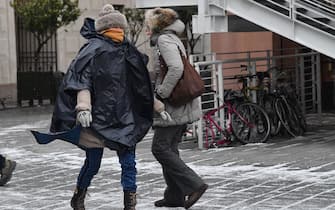 Polar temperatures, rain and snow are enveloping Europe, marking the official start of a winter that promises to be very complex for both governments and citizens to manage. The increase in cold increases the need for electricity, whose supply is scarce and whose cost is increasingly high as a direct consequence of the war in Ukraine and the fluctuating level of energy production in individual nations. And the risk is that of frequent blackouts in several European countries

WATCH THE VIDEO: Europe in the cold, frost and blackouts in Europe

Complicated start of the week a Paris where adverse weather conditions have caused 550km of traffic jams on major roads and highways of the Ile de France region, bringing traffic to an “exceptional” level, beyond the maximum red level. The Paris hinterland was decreed under yellow vigilance by Meteo France due to the rains that fell on very cold ground, forming ice, as well as a few snowflakes on the capital in the early hours of yesterday

The weather forecast for both Paris and several regions of the Hexagone announce new rainfall with potential snowfall, even abundant, between Friday and next weekend. The weekend that has just ended has already been characterized by snowfalls in various regions of the North and East

Weather, after the torrential rains cold and snow arrive: we are entering the middle of winter

Weather France has launched the alert for temperatures that should be average during the week 4-5 degrees lower than the seasonal norm and they could go below zero. If the next few days are drier, then snow will fall over two thirds of northern France, in the east, in the departments of Oise, Cher and presumably Ile and Vilaine, Mayenne, Orne, Sarthe, Maine et Loire, Indre and Loire up to southern Normandy and eastern Brittany

Even in the South of France – in the Hautes Alpes – the first snowfalls have arrived, which has allowed the opening of the ski season. To avoid the risk of blackouts, several ministers and the president himself Emmanuel Macron have asked the French in unison to “make all the necessary efforts to get through the winter in the best possible conditions”, invoking the “collective responsibility” of individual citizens, companies, local communities and the state to reduce energy consumption

The executive has prepared a crisis management plan as well as a series of financial aids to appease the growing discontent of the citizens. The emergency will depend on winter temperatures – if they are too low, the crisis will worsen – and on the pace of reopening of nuclear power plants by the company Edf (Èlectricité de France): now 20 out of 56 are stopped, with a production of around 36 megawatts , which should reach 40 as of January 1 and 43 at the end of the month

The newspaper Le Figaro recalled that in addition to the agreement France – Germany exchange of gas and electricity, the Hexagone will import energy from Italy, Benelux, Spain and the United Kingdom. The situation of potential French energy crisis results in part from the war in Ukraine but also from the problems of the national nuclear supply chain

Equally complex weather situation to manage for the Spain where, according to the State Meteorological Agency (Aemet), it is on its way”a strange meteorological phenomenon that we will experience for the first time in this century“, or a series of storms that will come from the Atlantic with intense and widespread rains in a large part of the country, especially in the south-west of the peninsula

“It has been pouring rain since dawn in the areas of theAndalusia western andExtremaduraand from there heavy rains will spread especially a Huelva, Cadiz and Malaga“, weather presenter Roberto Brasero announced yesterday. Since these are storms coming from the Atlantic, the Mediterranean areas will not be so affected, but they will bring warm air masses with them, so temperatures will have “an upward trend”, even if “in view of the weekend there could be a drop in temperature”

Weather alert at the highest levels also in Great Britain where, according to the Met Office, temperatures will plummet, between 1 and 4 degrees – therefore below average – throughout the week and in various regions, with possible snowfall in Scotland. At night the mercury column will drop several degrees below zero

Healthcare professionals have received the recommendation to implement the related cold plans as part of a level 3 alertbetween 6pm Wednesday and 9am December 12 in most parts of England. Citizens are urged by the authorities to use heating, despite rising energy prices, and to pay attention to particularly vulnerable people

The winter will be particularly difficult for Ukrainian citizens, as highlighted by the president Volodymyr Zelensky. “Winter will be very difficult, that’s for sure. However, it is worth seeing not as a test, but as a moment that brings us closer to victory. Each of these 90 days of winter,” the president told the nation, warning that “the enemy hopes to use it against us, but to endure it is to endure everything”

The recent repeated attacks on electricity distribution networks in Ukraine – especially with cruise missiles – on the part of the Russian armed forces still stand forcing 507 locations in eight regions into darkness. Mostly the areas of Kharkiv, Donetsk, Kherson, Mykolaiv and Zaporizhia are cut off from the energy supply

The impact of the war in Ukraine in matter of energy then they will be affected more clearly with the increase in demand in European countries usually supplied with gas and Russian crude oil. In the meantime, the EU embargo on imports of Russian crude oil by sea has entered into force, while close negotiations are underway in Brussels with the ambassadors of the member states on a special mechanism that sets a ceiling on the price of gas

Social bonus bills, how it changes according to income brackets