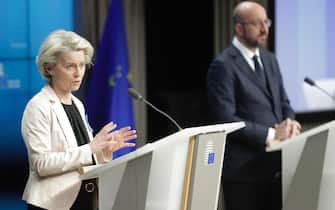 At the end of a long day of work, the agreement at the European Council has come halfway: EU countries will proceed tojoint and voluntary purchase of gas to assert their strategic and political weight on the markets, but the price ceiling is slipping (In the photo: the President of the EU Commission Ursula von der Leyen and the President of the European Council Charles Michel)

WATCH THE VIDEO: Biden: another gas from the USA. What is it about? The Skywall

It is not however the only agreement reached: in view of next winter, the 27 will proceed to replenish even common stocks. “Common storage to start as soon as possible”, reads the final document (In the photo: an LNG depot in Rotterdam)

Putin only wants rubles for Russian gas: the reactions and what changes

She has not arrivedas mentioned, a decision on the cap on gas prices and the reform of the electricity market. The Council has given a mandate to the European Commission to study all the options already on the table and to arrive at new proposals next May

One month of Western sanctions against Russia, but the ruble recovers

However, the European Union continues to work to break free from dependence on Russian gas: on this came the support from the president of the United Statesthe Joe Biden, these days on a visit to Europe

The quantity supplied by the United States will make it possible to replace Russian LNG supplies, and is destined for rise to 50 billion cubic meters by 2030an amount equivalent to one third of the current gas flows from Russia

In order to receive this liquefied natural gas, however, they are necessary structures that restore the gas to its gaseous state. Italy is gearing up: “The order that was given the day before yesterday to Cingolani and sent to Snam is to buy two more regasifiersthe. They are floating ships and not on the ground, for which it would take more time ”, said Prime Minister Draghi

However, the agreement on the text was sufferedin particular with regard to the cap on gas prices wholesale and market reform, ie the decoupling between the cost of gas and that of electricity that consumers find themselves in their bills

The German Chancellor Scholzat the end of the summit, he stressed that “Germany and other countries are skeptical when it comes to interventions on the energy market because supplies are put at risk and there is no sustainable effect on prices ”

At the end of the summit Dragons he stressed that the Commission has been instructed to draw up proposals on the gas price ceiling by next May. “We are satisfied with the conclusions“Said the premier anyway

The European Council then agreed to establish a Solidarity Trust Fund for Ukraine inviting its international partners to participate, and calls for preparations to start without delay. The European Commission will be asked to provide technical assistance to help Ukraine to implement the necessary reforms

Finally, the Council also gave the green light to a plan to deal with the food shortage caused by the war in Ukrainewhich is a major exporter of grain. The program aims at guaranteeing supplies to the countries most at risk and to encourage production in fragile regions