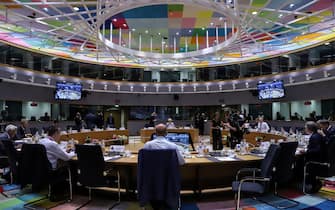 The European Council formally gave the green light to granting of candidate countries for EU entry to Ukraine and Moldova, based on the Commission’s recommendations. Green light also at “European perspective” for Georgia

WATCH THE VIDEO: Ukraine, Zelensky: EU must consider us an equal partner

“Today is a good day for Europe. Congratulations to President Volodymyr Zelensky, President Maia Sandu and Prime Minister Irakli Garibashvili. Your countries are part of our European family. And today’s historic decision of the leaders confirms this ”, wrote the president of the EU Commission in a tweet Ursula von der Leyen

The EU Council will address the proposed gas price ceiling. How would it work?

And the Ukrainian president Volodymyr Zelensky he connected live, according to what is learned, to the European Council room in Brussels, after the positive vote for candidate status (archive photo)

ALL THE CONFLICT UPDATES LIVE

Then Michel, in a press conference, said: “It is a strong message of political determination. We also found an agreement on how to bring support to Ukraine, at a financial and military level and we confirmed our determination to counter the consequences of the Russian aggression in terms of food and energy as well ”

Press conference also for the French president Emmanuel Macron: “Since the first day of the war we have reacted quickly, with military and financial support to Ukraine. A strong and united Europe has risen to the occasion, we owe this decision today to the Ukrainian peoplewhich fights for its territorial unity and also for the Moldovan people, “he said

“We see a phenomenon of fatigue in some countries due to enlargement, because the path is long and hard. It will take a long time, let’s be honest. Instead we need to work faster to stabilize our neighborhood, “Macron added

“The Russiausing food as a weapon in his war against Ukraine, it is solely responsible for the global food security crisis that caused. The European Council urges it to immediately stop targeting agricultural structures and unblocking the Black Sea, in particular the port of Odessa “, to” allow grain exports and commercial shipping operations “, it later reads. in European Council conclusions on Ukraine approved this evening

“The EU remains strongly committed to providing further military support to help Ukraine to exercise its intrinsic right of self-defense against Russian aggression and to defend its territorial integrity and sovereignty “, we read again. In the photo: Prime Minister Mario Draghi (S) with Prime Minister of Greece Kyriakos Mitsotakis, Brussels