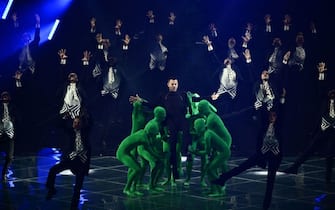 The second semifinal, live from the Pala Olimpico in Turin, opens with a great choreography that makes room for an exceptional dancer: Alessandro Cattelan who offers a moment as a true showman. Very elegant, in black, with a jacket edged with very bright rhinestones and sparkling shoes, he wears Armani

Cattelan introduces his two adventure companions. Laura Pausini wears the red evening dress shown in preview in the afternoon, the first made for her by Alberta Ferretti for the evening event. With the full skirt and strapless fan-shaped bodice, it has a sophisticated design on the front and is complemented by a slim belt with a jeweled buckle. Around the neck, a very bright crystal necklace. Wavy wet effect hairstyle and scarlet lipstick. Mika remains faithful to Maison Valentino and sports a total yellow look, including shoes

The Finnish The Rasmus opens the evening with the song Jezebel. The band, born in 1994, climbed the international charts in the early 2000s with the single In the Shadows; twenty years later they confirm their gothic rock vocation also through the unmistakable look. Tonight a mix of black and yellow

Michael Ben David, competing for Israel with IM, has depopulated on social media in the last hours with the marriage proposal by his partner Roee Ram. Attentive to style, the singer relies on the professionalism of Eyal Hagbi who, even tonight, has selected for him an all-white look with a corset, very trendy

The report cards of the Eurovision Song Contest 2022: the second semifinal

The singer Konstrakta, blue eyes and very dark hair, captured the attention of the observers with her look at the Turquoise Carpet. She too tonight for her light dresses, as for the previous appearances in which she chose to promote a brand in her country, that of designer Aleksandra Lalic. No volumes but geometric cuts for the performance of the song In Corpore Sano

For Azerbaijan Nadir Rustamli is competing with Fade To Black. The 22-year-old Azerbaijani chooses light tones that add intensity to his figure in the soft atmosphere

The group from Tbilisi Circus Mircus represents Georgia with Lock Me In. Chameleon, funny and indecipherable, even tonight they take over the scene without with their style without rules made of disguises, masks and bizarre details. Trench coats, welder’s goggles, studded jackets and decorated beards. The performance ends with “Make Love Not War”

The talented Emma Muscat, an old acquaintance of the Italian public and talent show enthusiasts, presents hers I Am What I Am for Malta, his country. After having captured the attention with her white paneled dress with very deep slits Drew & Crew by designer Drew Warhurst, tonight there is no lack of style with a minidress all mirrors that refract the light of the spotlights in a thousand flashes. Muscat starts at the piano and ends with a dance step

Emma Muscat, from Amici 17 to Eurovision 2022: who is the singer who represents Malta PHOTOS

Achille Lauro makes his appearance on the Eurovision stage as a true superstar, ready to collect votes and support for San Marino. For Stripper he returns to perform with Boss Doms and together they overwhelm the audience by inflaming the evening with the usual mix of sensuality, style and provocative movements