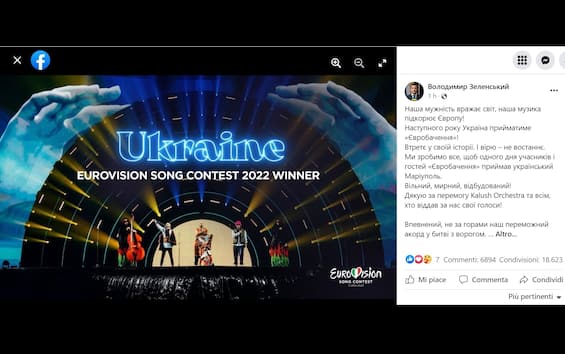 The victory of Ukraine at the Eurovision Song Contest 2022 (THE SPECIAL – REPORT CARDS) has a particular meaning, which goes beyond the mere musical context. And the success of the Kalush Orchestra was immediately celebrated by Ukrainian President Volodymyr Zelensky, who has already revealed his plans and wishes for the next edition: to host the festival in Mariupol, the martyr city of the Russian invasion war.

The president showed all his satisfaction with the victory: “Our music conquers Europe. Our courage impresses the world, our music conquers Europe! Next year Ukraine will host Eurovision! third time in its history. And I think – not for the last time, “he wrote on Facebook. “We will do everything – he added – to host Eurovision participants and guests in Mariupol Ukraine one day. Free, quiet, restored! Thanks for the victory of the Kalush Orchestra and to all those who voted for us!”.

THE REACTIONS OF THE EU SUMMITES

The EU leaders also greeted the victory of the Kalush Orchestra and Ukraine at the Eurovision Song Contest in Turin on Twitter. “Tonight your song won our hearts. We celebrate your victory all over the world. The EU is with you,” wrote European Commission President Ursula von der Leyen. “The hope is that next year’s Eurovision can be hosted in Kiev in a free and united Ukraine”, added the President of the European Council Charles Michel, also citing some lines of the winning song. Stefania: “I’ll always find my way home, even if all roads are destroyed.” A congratulatory message also arrives from the EU High Representative for Foreign Affairs Josep Borrell: “Long live the music! Long live Europe! Glory to Ukraine!”.