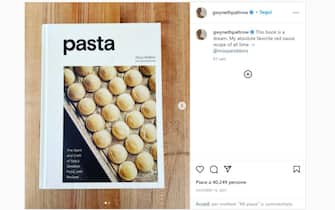 The actress Gwyneth Paltrow makes no secret of his passion for our pasta. Guest of Roberto Cucinelli in his Solomeo, in Umbria, Paltrow together with his friend and colleague Cameron Diaz did not spare themselves the praise for the famous “rigatoni with tomato and mozzarella” so loved by the cashmere entrepreneur. Gwyneth is an excellent cook, as certified by her many cookbooks!

Anthony Hopkins and Italy have had an excellent relationship for a long time, and we should not be surprised if the Hollywood actor has learned to cook an excellent spaghetti with tomato sauce on his own. He also proved it the last time he came to spend time in Rome: on social media he shared a video in which he turns a mouth-watering sauce into the pot.

Who better than Joe Bastianich do you know the importance of combining the right sauce with the right form of pasta? The ex-judge of Masterchef Italia, today at Masterchef Usa, is one of the bastions of true made in Italy cuisine overseas, and we love him for this too.

For the actress Diane Krugerspaghetti are a great diversion after the days spent between a press conference and another to promote films, a Hollywood version of the “midnight spaghetti” typical of Italians on vacation

Drew Barrymore, whatever he does, he proves to be a force of nature. As for pasta, she is so fond of it that she not only shares photos with Sunday lunches based on spaghetti, but in her The Drew Barrymore show taught everyone the right amount to throw in the pot!

Who said actresses don’t eat carbohydrates? It is true, they must respect a somewhat harsh diet when they have to prepare for a particular role, but in moments of relaxation they too indulge in a first course without too many thoughts. Bella Thorne she did it at New York Fashion Week: in an Italian restaurant, she enjoyed a spaghetti dinner with friends and colleagues.

All the news about Bella Thorne

Emily Ratajkowski, the supermodel, was very clear: the romantic evening of her dreams consists of a plate of pasta and a glass of won, enjoyed in front of a good movie. How to blame her?

Emily Ratajkowski parades for JW Anderson in an arcade

Perhaps partly due to its Italian origins, too Robert De Niro is a fan of pasta. He also demonstrated this in his film career: in The Goodfellas (Goodfellas), the film directed by Martis Scorsese, he made memorable the scene of the meal at home of Tommy De Vito, the character played by Joe Pesci, which we see in the photo .

Jessica Chastain she is in love with Italy in every sense: in 2017 she married Gian Luca Passi di Preposulo, a Treviso count scion of an ancient family of Bergamo origin. Thanks to this love, Jessica has rightfully entered the ranks of pasta ambassadors abroad: in a video shared on social media she explains why she doesn’t need a spoon to shoot a forkful of speghetti, a mistake often made by foreigners on vacation.

The Good Nurse, the trailer for the film with Eddie Redmayne and Jessica Chastain

Who would have thought: even the actress and queen of pop J.Lo, Jennifer Lopezwhen not in Italy, he indulges in a few outings to the best Italian restaurants in Los Angeles to eat a good plate of pasta.

Shotgun Wedding, Jennifer Lopez’s new film will be released in 2023

One of the most beautiful couples of celebrities of our days is certainly the one formed by Justin Bieber And Hailey Baldwin, today Bieber. She has made public on TikTok her exclusive recipe for rigatoni with tomato and truffle and at the time of the lockdown, when they were forced into the house together with Justin, they kept company with their fans chatting and cooking pasta on Facebook.

Hugh Jackman he is not only a very good interpreter, but he is also an excellent fork! After discovering that his favorite food is nothing less than ice cream, looking at these photos of him biting into abundant pasta dishes we can only congratulate the American actor for his excellent taste.

Kourtney Kardashian not only did she choose Italy to marry Travis Barker, the drummer of Blink-182, but she considers spaghetti with tomato sauce one of the best foods in the world and this photo, shared by her social network herself, proves it.

Kourtney Kardashian and Travis Barker on vacation in Italy

The Sicilian origins of Lady Gaga, aka Stefani Joanne Angelina Germanotta, are known to most but perhaps many do not know that the American superstar is also capable of preparing homemade pasta. Here is irrefutable proof of her love for the first Italians.

All the latest news on Lady Gaga

The passion of the actor and ex-boxer Mickey Rourke for pasta it demonstrates once again how important this food is for physical (and mental) health and a person. who knows that one day the old saying “An apple a day keeps the doctor away” will not be changed …

Mickey Rourke turns 70: from 9 ½ weeks to The Wrestler: the most famous films. PHOTO

Ayda Sabahat Evecan is an American television actress and wife of the music star Robbie Williams: that she managed to win him over with a candlelit spaghetti meal? From this photo, it would almost seem so.

Robbie Williams, tour for 25 years of career makes a stop in Bologna

Also Selena Gomeza successful singer and actress, when she comes to Italy she can’t help but enjoy a lunch of tagliatelle with tomato sauce before resuming the plane.

Selena Gomez turns 30, the 5 most famous albums of the American artist

Zoe Kravitz is experiencing a golden moment for her acting career thanks to the role of Catwoman in Matt Reeves’ The Batman. In this photo she is portrayed some time ago, with the satisfied expression of someone who knows that she is about to enjoy an appetizing dish of rigatoni with tomato sauce.

Stanley Tucci has made his passion for everything related to the Italian food culture almost a second job. The American actor loves our wine and cooking like few other things in the world, and his skill in the kitchen is universally recognized.

Cameron Diaz is another huge fan of Italian pasta: she never misses an opportunity to share ideas on social networks for tasty sauce recipes to combine with spaghetti, orecchiette, rigatoni and tagliatelle ..

TV chef Jamie Oliver sent the actor into his show Danny De Vito, who cooked live the recipe for spaghetti with tomato, handed down in his family for generations. It looks really good!

Greetings Danny DeVito: the photos of the actor yesterday and today

George and Ama Clooney they have already made public amends: they are not very good at cooking, even if they love good food. Important Italian chefs often go to their home on Lake Como to prepare some lunch or dinner for imported occasions, and guess which course is the most popular? That’s right, a plate of pasta!

The diva Madonna was among the first to make public her love for Italian pasta: Louise Veronica Ciccone really cares about her origins and whenever she can, she returns to Puglia for a good plate of orecchiette.

The favorite dishes of VIPs, from Zendaya’s ice cream to Elettra Lamborghini’s pancakes

Unofficial sources claim that the Oscar-winning actress’s favorite dish Meryl Streep are the penne with roasted cauliflower. Whether this is true or not, we know that Meryl also loves pasta and we can imagine her in the kitchen while she boils the pasta: in the photo she is at the stove in the film Julie & Julia, in which she plays a cook.

The gem of this roundup is none other than His Majesty King Charles III. In fact, he too was photographed eating an excellent plate of spaghetti. In 1988, the then Prince came to Italy, in the Marche region, as a guest of the Leopardi Counts of Recanati: the purpose of the private visit was to discover the hidden artistic beauties of the area, but who knows that he also fell in love with the local cuisine!

The favorite dishes of VIPs, from Zendaya’s ice cream to Elettra Lamborghini’s pancakes