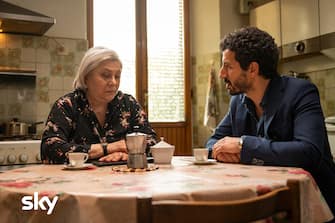 To get rid of Riccardo and have control over the restaurant and his business, Carlo decides to buy the share of his aunt Maria, to whom he explains that to pay that part he has already had the villa by the sea evaluated. Maria refuses the offer and decides to talk to Alba about it

WATCH THE VIDEO: Everyone is fine at home – The series, episode 5: Carlo and Alba. The clip

However, Maria too is worried about her son’s attitude and fears that it could ruin the family business, so she decides to exclude him from the management of the restaurant.

WATCH THE VIDEO: Everyone is fine at home – The series, episode 5: Luana and Riccardo. The clip

Maria asks Beatrice, Carlo’s partner, to take care of the management of the restaurant for the share due to Marini

At home all well – The series, the photos of episodes 3 and 4

Carlo and Elettra decide to talk to Luna about the alleged relationship with Manuel, the girl eventually confesses to frequenting the chef of the restaurant, almost 20 years older than her

At home all well – The series, the photos of episodes 1 and 2

Meanwhile, Ginevra is involved in organizing the marriage of Sandro and Beatrice

At home everyone is fine – The series, Gabriele Muccino and Barbara Petroni speak. VIDEO

In desperate need to recover the 50,000 euros he owes the loan sharks, Riccardo makes an agreement with Carlo by deciding to support the resort deal in Sardinia. While the two talk about it, the restaurant is targeted by Riccardo’s creditors, who shoot at the windows

At home all well – The series, Emma Marrone and Luana. VIDEO

The police investigate the shooting at the restaurant, the media talk about a case of racketeering and Carlo’s business in Sardinia is in danger of being damaged. So Carlo decides to talk to Riccardo and give him a hand to get rid of that debt once and for all

At home everyone is fine, differences between the film and the TV series

Luana, who miraculously emerged unharmed from the shooting with the child she is carrying, asks Riccardo to report the loan sharks. But Riccardo doesn’t make up his mind to talk to the police

At home, everyone is fine – The series, everything you need to know

Meanwhile, Ginevra decides to help Carlo by mortgaging their house in order to close the deal with Mandolisi. Carlo asked her to marry and the two go to town for publications

At home, everyone is fine – The series, Jovanotti’s theme song. VIDEO

Paolo, on the other hand, is struggling with Giovanni, who has returned with his mother but has escaped from the hotel. To find him is his father, who goes to pick him up on the Tiber Island

Paolo and Giovanni get back together, having recomposed their relationship. The child decides to stay in Rome with his father

The return to the restaurant, however, reserves an unpleasant surprise for Paolo: in fact, he discovers the shooting just when he is painstakingly trying to give his son a normal existence.