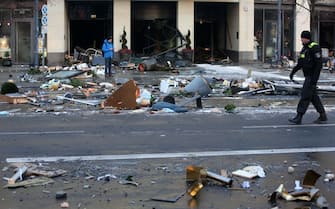 The structure of the aquarium Sea Life of the hotel DomAquaréein the city center, has succumbed to causes yet to ascertain. This was reported by the Dpa explaining that “a large aquarium tank has exploded and the water is pouring into the street”, resulting in “closure of traffic”

Berlin, the largest cylindrical aquarium in the world exploded

On site are present a hundred firefighters. The building DomAquarée houses the aquarium Sea Life and the AquaDoma giant tank where there are 1,500 species of tropical fish and which represents one popular tourist attraction

A special aquarium at the San Paolo pediatrics

The AquaDom is “the world’s largest free-standing cylindrical aquarium,” according to the DomAquarée website. THE fire fighters of the city they wrote on Twitter that the water comes out but the causes they are still unknown

The spilled liquid from the vertical tank it would come up to the third floor of the hotel. Police say the cause of the explosion is not yet known

The German newspaper Bild Talk about “material fatigue”. Many posted videos show them the current conditions. As reported by the weekly Der Spiegelthe explosion caused parts of the hotel’s facade to collapse

The nearby Karl-Liebknecht street it was partially closed due to the “enormous amount of water on the street,” he said the Berlin public transport office. The police are ruling out the attack for now

“At the moment there are absolutely no directions in that sense,” said a spokesman to the Dpa. Regarding the causes of the collapse, some media speak of a structural failure

14 meters highthe AquaDom contained one million liters of salt water. According to preliminary information the explosion would happen in the middle of the nightaround 4:30

In Dubai yoga is done among fish and sharks

Here’s the inside of the Radisson after the aquarium explosion

The interior of the Radisson after the aquarium explosion

The interior of the Radisson after the aquarium explosion

A 2010 photo with a diver inside the Aquadom