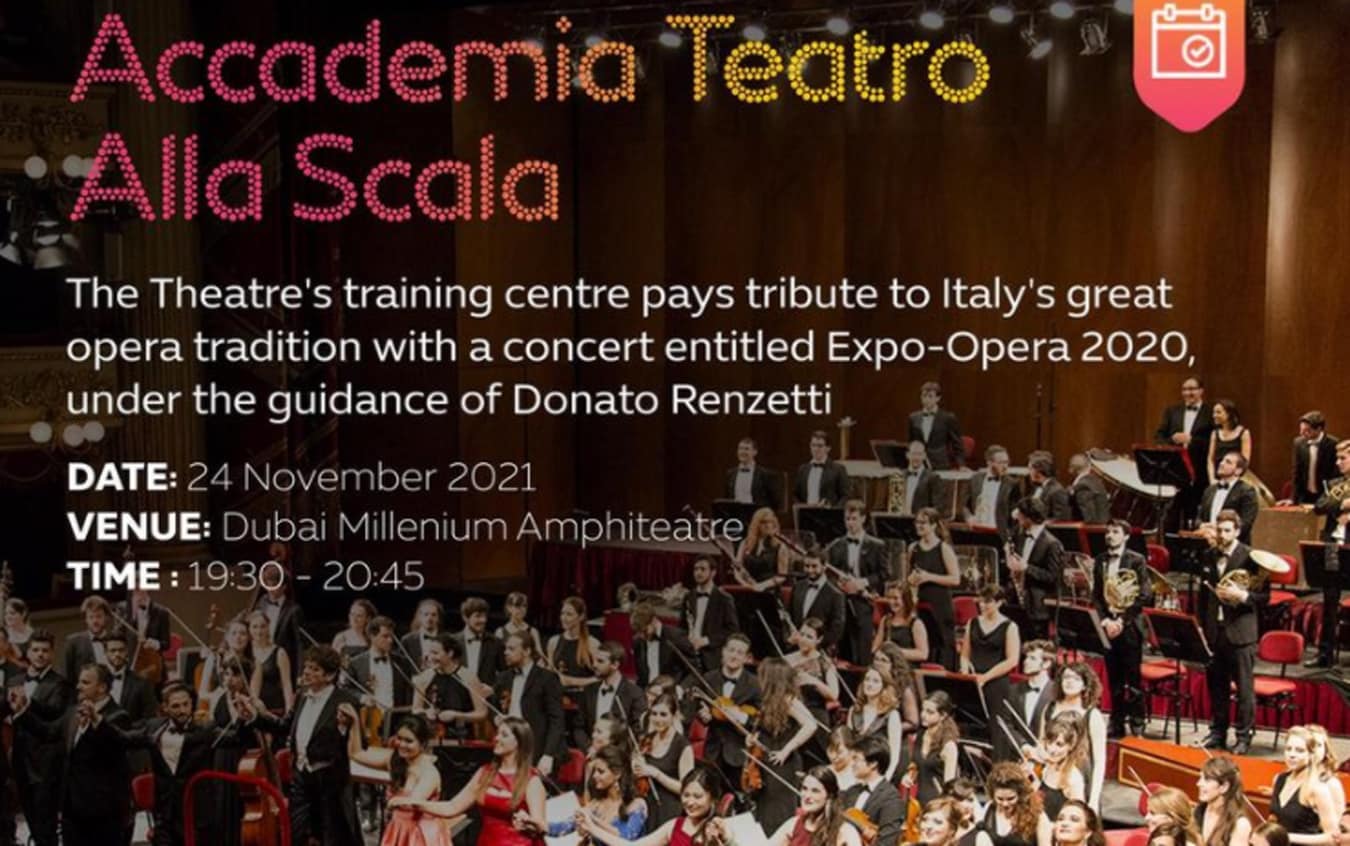 The National Day of Italy at Expo2020 Dubai is celebrated, in the presence of the Italian and foreign institutional authorities, with a concert by the soloists and orchestra of the Teatro alla Scala Academy (ALL NEWS HERE), directed by Donato Renzetti, Wednesday 24 November 2021 at 7.30 pm (4.30 pm Italian time). The event, which will be held at the Dubai Millennium Amphitheater, is realized thanks to the support of the Bracco Foundation, Gold Sponsor of the Italian Pavilion at the Expo and Founding Member of the Scaligera Academy and will be broadcast in live streaming (on the page dedicated to the event, on the Expo2020Dubai website, the link to the live broadcast on the virtual platformxpodubai.com will be published on the day of the concert).

For the day that celebrates our country, the Italian Pavilion has therefore chosen the young talents of the Teatro alla Scala, some of whom are already established professionals, entrusting them to the guidance of a director of extraordinary experience such as Donato Renzetti for the execution of a program dedicated to the great Italian opera repertoire. The soprano Clarissa Costanzo, the mezzo-soprano Martina Serra, the tenor Azer Zada ​​and the baritone Ettore Chi Hoon Lee will interpret arias and ensemble pieces from our lyrical tradition. For the Maestro, meeting the young people of the Academy is also a sort of “homecoming”, since Donato Renzetti began his long career at the Teatro alla Scala when, still a teenager, he joined the orchestra as a percussionist .

“The Bracco Foundation has a special bond with the Teatro alla Scala Academy” says Diana Bracco, President of the Bracco Foundation. “In fact, in 2012 we decided to focus an important part of our cultural activities on the new generations in all fields, giving life to the project I will become the Bracco Foundation for young people, which offers training opportunities through an articulated program of scholarships, degree awards and training internships. In this context, the partnership with Accademia Teatro alla Scala was born, with which we share first of all the value of culture as an educational tool capable of improving the quality of life and strengthening social cohesion. In recent years “, adds Diana Bracco,” we have been alongside the Academy in many initiatives, not only in Italy, but also abroad: concerts, exhibition projects and dance performances, such as Cinderella that we made on the occasion of Expo Milano 2015. Now aWe have decided to bring the Scala orchestra to Expo 2020 in Dubai, offering these young talents a prestigious international stage “.

The concert opens with the symphony de The force of Destiny followed by one of the most poignant arias of the opera, the heartfelt “Peace, peace my God” entrusted to the interpretation of Clarissa Costanzo, soprano from Caserta, who has just graduated from the Scala Academy. So it is Ettore Chi Hoon Lee who wears the role of Renato, blinded by resentment in “Eri tu” from Act III of A masked ball; the Korean baritone, also a recent graduate, has already distinguished himself in his first roles on the stage of the Teatro alla Scala, as in the Don Magnifico in Cinderella by Rossini.

After the Symphony of Nabucco, the former student Azer Zada, 31 years old Azerbaijani, one of the most sought-after and esteemed tenors of his generation, sings the famous romance “Celeste Aida”. Azer Zada, despite his young career, has already brilliantly dressed the roles of the great operatic repertoire – Cavaradossi, Radamès, Rodolfo, Alfredo, Don Josè, Pinkerton – collaborating with directors of absolute depth such as Zubin Mehta, Riccardo Muti, Myung-Whun Chung , Riccardo Chailly, in prestigious theaters, in Italy and abroad.

Two intense moments follow The Troubadour. The dramatic air of Azucena, The blaze screeches, is interpreted by Martina Serra, mezzo-soprano from Cagliari, a veteran of the recent success in Sassari in Madama Butterfly. Clarissa Costanzo and Ettore Chi Hoon Lee are instead engaged in the duet between Leonora and the Count di Luna “Udiste? … Mira, of bitter tears ”, another proof of remarkable pathos.

The Accademia orchestra then performs the Intermezzo from Manon Lescaut by Giacomo Puccini, followed by Martina Serra, Azer Zada ​​and Ettore Chi Hoon Lee in the trio “Who is? … I know that to his pains… Goodbye, fiorito asil ”from the III Act of Madama Butterfly.

And the homage to the Italian opera tradition could not end except with the Brindisi della Traviata.

“Working with young people is a priceless joy and satisfaction for me: for over 30 years I have been passing on my experiences in conducting courses, first in Pescara and now in Saluzzo – he remembers Donato Renzetti – who adds: “The meeting with the young people of the Teatro alla Scala Academy was intense and the quality of the work we have done together in these days fills me with confidence for the future. I am also delighted to be back with them on the podium at La Scala for the Gala that will celebrate the 20th anniversary of the Academy on 12 December, a beautiful milestone to be celebrated with pride “.

As he points out Giuseppe Vita, President of the Teatro alla Scala Academy: “the experience at Expo 2020 Dubai can only confirm the exceptional nature of the training course of the young La Scala, called today to compete in a context of such international prestige. A path that the Academy constantly enriches with opportunities for professional growth, so that young people, now students, tomorrow recognized artists, become ambassadors of musical culture in the world “.