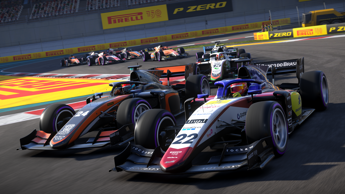 Champions Edition players will be able to rekindle old rivalries by competing against other icons of the game, including Michael Schumacher

Codemasters and Electronic Arts have announced a series of updates starting October 11 for F1 22. F2 takes center stage with the introduction of the 2022 FIA Formula 2 World Championship in-game. Players can now line up on the starting grid for a 14-race season, including the F2 Sprint, competing against new entrants Logan Sargeant, Jack Doohan and recently crowned champion, Felipe Drugovich. F1 22 My Team mode is enhanced on October 17 with Mika Häkkinen as the latest icon of the game. The “flying Finn” won the World Championship twice in 1998 and 1999 and was one of the most respected drivers of his generation. Champions Edition players will be able to rekindle old rivalries by competing against other Icons in the game, including Michael Schumacher, whom Häkkinen called his greatest rival. McLaren Racing’s special Future Mode livery, inspired by the futuristic and innovative landscapes of Singapore and Japan, is included as a free download for all players for a limited time. Players will also have the option to download the Future Mode livery for free starting in December and equip it with the player’s car.


With the F1 season heading west, all players will receive free US-inspired content. From October 17, US-inspired livery, helmet, jumpsuit and gloves will be available as well as The Griddy podium celebration. The dance vogue arrives in F1 22 for all the drivers created by the players. Additional customization items are available to unlock over the course of the 30 free and VIP levels of Podium Pass Series 3, which launches on 12 October. “We’ve packed a lot into the latest update, with something for all players,” said Paul Jeal, Senior Director F1® Franchise at Codemasters. “Whether it’s vibrant Podium Pass items, crazy celebratory dances, a new racing icon or the full 2022 F2 season, players have plenty of new content available that offer them the perfect excuse to get back on track.” . Finally, the game includes the recent updates of the circuits of Spain, Australia, Abu Dhabi and the new Miami International Autodrome. For veterans, F1 22 expands its features with the return of My Team, now with three starting points, the Ten-Year Career with two-player capabilities, Offline Split-Screen Multiplayer and PC VR.