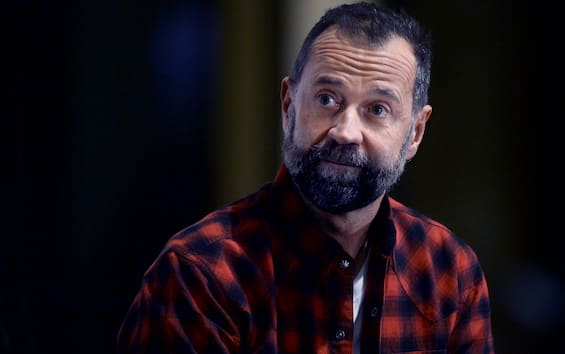 Fabio Volo opened up for the first time about his separation, recounting the details and implications on the occasion of the long interview given to the Italian edition of Vanity Fair.

The popular actor, writer, radio and TV host, and also a screenwriter has opened up about his split for the first time. On the cover of the issue of Vanity Fair on newsstands from today, November 30, it was told exclusively for the famous magazine, opening up like never before.

“Maybe it’s better that we leave each other: for the two of us, for the children, for everyone”, these are the words of Fabio Volo, born Fabio Luigi Bonetti, to explain the end of his last relationship.
But not every silver lining has a silver lining, on the contrary: the writer, actor and presenter explained to Vanity Fair that the moment in which love vanished served to make him open his eyes, teaching him what that much-quoted feeling really is, by poets as well as mere mortals.
“That’s when you learn how to truly love,” she said of breaking up.

At the bottom of this article you can see the cover of the issue of Vanity Fair on newsstands from today, with Fabio Volo as the cover story.

Fabio Volo recounted for the first time his separation from Johanna Maggy, the partner with whom he had his children Sebastian, 9 years old, and Gabriel, 7.
She – full name Johanna Maggy Hauksdóttir – is an Icelandic pilates teacher and holistic coach, born in a village in the province of Reykjavík.
In 2016 he founded the lifestyle blog Mother’s Spell in which she talks about motherhood, well-being and nutrition. From Iceland she moved to New York for many years, after which she landed in Milan, where until a few years ago she lived with her family, the family she created with her Fabio Volo. We say “until a few years ago” because Volo revealed for the first time that you have already been living in another house for two years, alone.

Waiting to see Fabio Volo at the cinema at the beginning of 2023, flanked by his colleague Vittoria Puccini in the film A great will to live (taken from his penultimate book), Fabio Volo talks to VF describing himself as a single father who has finally rediscovered himself, realizing that he has what could be defined as “superpowers”.
“I’m better off as a dad, which I didn’t know before parting ways,” says Fabio Volo. “I’m better. Because there’s only me,” he adds.

The importance of meditation

In the number of Vanity Fair just released, Fabio Volo talks about the maturity he has reached. He explains that he owes much of his newfound wisdom to meditation, which he practices daily.
“At 50 I returned ‘home’: I meditate, I pray, I think, I read, I study”, he says. And he adds that the balance of the mind is also reflected in the balance of the body, and vice versa. In addition to meditating, Fabio Volo talks about the importance of doing physical activity every day, an appointment that he never fails to respect.

As for the search for a new love story, he says that looking for a partner is not among his priorities for now, however if the opportunity presents itself, he assures him that he will be able to seize it. This maturity achieved is also due a lot to the lesson learned from his experience as a couple with Johanna Maggy, he confesses.

Fabio Volo has been living alone for two years now

The star says that he has been living alone for two years now, in a house near the house of his ex-partner.

He and she are on very good terms, and experience what is usually referred to as “an extended family”. “The children stay with me for a week and with her for a week, during that week they stay with me for a day and with her for a day,” he explains to VF.
There is no lack of balance, explains the artist, who adds that holidays, Sunday lunches, dinners and parties are often spent all together, in full harmony. Harmony is rooted in respect, a feeling that the former couple has for each other, as Volo tells us.

Volo denies the rumors of the alleged betrayal

“I have never cheated on Johanna. I have always been faithful to her,” replies Volo to deny the rumors about his alleged betrayal as the cause of the separation. He explains that the decision to separate came after a long and painful crisis, as any crisis can be defined as such.
“I didn’t think I’d break up, and that I’d find myself single. When the moment came ‘maybe it’s better if we break up’, of the two I was the more scared”. But he adds: “Johanna and I it’s not that we no longer love each other because we are no longer together: love has transformed. If in the relationship the two people don’t bring out the best part of the other, they can either stay together to be able to say that they have been together for fifty years, as if it were a prize, or they can say ‘we continue to love each other even if we are not under the same roof’”, these are the words of the actor and writer.

Fabio Volo: “I’m not against the couple”

Volo is keen to underline that he is not against married life, far from it.
“I would have stayed with Johanna for life if it had gone well,” he says. “I’m not ‘against the couple’, I don’t make plans, but if there isn’t something in there that keeps me alive, I can’t go on”.

He goes on to talk about how, in his opinion, there is nothing that can justify wanting to keep alive a relationship that is no longer alive at all costs. Not even if that justification is: “We do it for the children”.
“The true misunderstanding is that people say: ‘I’m together for the children’. Instead it is: ‘we must leave for the children’. Because they deserve the truth, and if you, who are the person they respect the most, tell them lies, then you send them out into the world and they will say: if my father lied to me, if my mother lied to me, then why should I trust this person?” says Fabio Volo.

You can see the cover of the issue below Vanity Fair on newsstands from today, with Fabio Volo as the cover story.