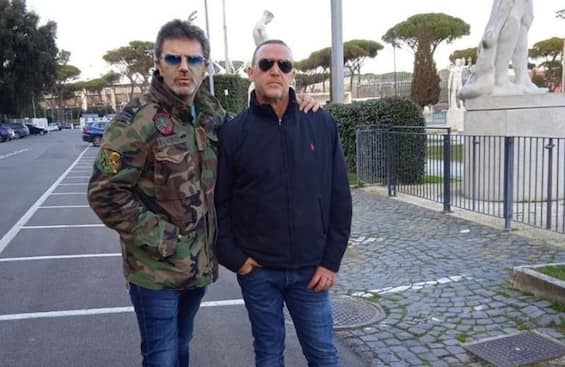 Alberto DeVenezia presents Faces covered – Story of an ultrasavailable at Prime Videos starting December 27, 2022. Distributed by Hypnotic Moviethis is the new feature film directed by Stephen Calvagnadirector of I do not exclude the return and The wolf.

A docufilm that tells the true story of Fabrizio Toffolo, one of the protagonists of Lazio fans in the ultras world. Through his own stories, from his first time at the stadium to becoming one of the leaders of Lazio’s Curva Nord, Toffolo provides anecdotes of a world which, since the 1970s, has been characterized by his “football creed”. And he does it by relying on Calvagna’s camera, with whom he shared various moments in the 1980s, both at home and away.

The director declares: “I had frequented the Curva Nord together with Fabrizio Toffolo since the 1980s, we were together in the same group, Irriducibili; then, for some time, we didn’t see each other again and we met again, when he proposed me to make this docufilm that he had already tried to set up with other people who, unfortunately, however, didn’t complete the job . It was an interview in a theatre, while I tried to carry forward my idea of ​​cinema through his story, trying to put Fabrizio on the road and also resorting to piano sequences. There wasn’t a script, everything was drawn up spontaneously by Fabrizio and I think this affects everyone, even those who don’t like football. In reality, the film was finished in May 2019, but, between the pandemic due to Covid-19 and the typical general problems relating to the distribution of an independent work, we have only now managed to make it visible to the public”.

They embellish Faces covered – Story of an ultras a vocal contribution by Pino I teach and archival images of the Lazio world to which the journalist collaborated Michael Plastino; while the actor Claudio Vannialready several times interpreter for Calvagna, supports as co-protagonist Fabrizio Toffolowho observes: “I wanted to tell that ultras world that enraptured me as a child and whose values ​​I have since proudly embodied. Whether I like it or not, she’s been a part of my life, for better or for worse.”.

Produced by Poker Movie 2005 and from Hector III for Strikemonthin collaboration with Trevi Cultural Association, Faces covered – Story of an ultras see Massimiliano Cuzzupoli to photography, Roberto Salvatori on assembly and Paul Carnivali to the soundtrack and audio mix. Responsible for distribution materials is Andrew D’Emilio.