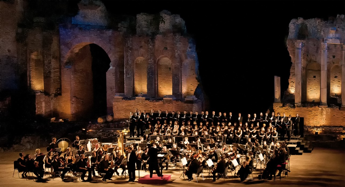 The monumental Piazza Dante in Catania will be the setting for the conclusion of the 2022 edition of the Opera Festival of the Stone Theaters “Il Risveglio”, promoted by the Sicilian Lyric Choir, which is preparing to realize the last evening event on September 15th, at 21, with the innovative contemporary opera “Falcone and Borsellino, or the wall of the martyrs”, celebrating the thirtieth anniversary of the death of the two great characters. “And it will be a commemoration, but not the usual many words but with the notes of an unpublished work in the form of a concert”. In 2022, 30 years have passed since the death of the two judges who dedicated their lives to the fight against the mafia. “The tragic events that shook not only Palermo and Sicily but the whole of Italy have remained indelible in the hearts and minds of all.” Falcone and Borsellino, or the wall of the martyrs “, is a work of strong civil commitment due to courage of two authors who belong to the same land as the two magistrates: Antonio Fortunato, the composer, and Gaspare Miraglia, the librettist “, say the organizers.


“The idea, initially sketched, – Fortunato and Miraglia declare – overcome the terrible watershed of the ’92 massacres, through criminal, atrocious and ruthless events, which escaped the hands of indignant and revolted civil society, always returned as an obsession in the our thoughts, with the clear conviction that two Sicilian artists could not refrain from using their sensitive creative tools and their generous indignant muses, to weave a living song, edifying an entire city for two authentic hero judges who had to say their consciences were little shaken and inspired. Thus, precisely from these intense emotions, strong and uncontrolled, but well balanced, came the feverish effort to give voice to a wounded city, torn apart by evil, which was resurrecting and finally redeeming itself, or trying to do it, by the pervasive mafia “.

The work takes place on the day of the anniversary of the attack on the magistrate Giovanni Falcone. Just when discouragement seems to have taken hold of everything and everyone, unexpectedly, an assembly of citizens (exponents of civil society), tired of suffering in silence the outrage of “Cosa Nostra”, which now also conditions individual existence, comes in copious numbers. The intent of this popular meeting, as well as to pay dutiful homage to the two heroes, Giovanni Falcone and Paolo Borsellino, and to the thousands of victims murdered by the mafia, is, although not above all, to awaken the collective execration against the world of organized crime which, more and more openly, intends to affirm its ferocious rules of violence and oppression.

The pleas of the community are poignant and heartfelt, so that the two judges, ideally, present themselves to the suppliant citizens to tell their tragedy. Eventually, at least through poetry and music, the indignation of the honest manages to vanquish the terrible monster that is no longer tolerable in a civil and democratic society, and it is hoped that the resulting catharsis will be welcomed by civil society. The single act will see the Calabrian Philharmonic Orchestra, orchestra in residence of the Festival, and the Sicilian Lyric Choir lined up, under the authoritative baton of Giuliano Betta, which plays in the most important theaters of the international opera scene; “It is a great pleasure to be able to return to wonderful Sicily – declares the director Betta – with the performance of a true musical masterpiece that awakens the minds and evokes strong emotions”.

The cast includes, for the musical part, the participation of Clara Polito (the mother of all mafia victims), Francesco Verna (the father) and Riccardo Bosco (Mafia, incarnation of evil), while for the actor Alessandro Idonea and Bruno Torrisi (who will give voice, respectively, to Giovanni Falcone and Paolo Borsellino). The Sicilian Lyric Choir will interpret the sentiments to the civil society of Palermo and will be instructed, as usual, by its permanent teacher, Francesco Costa, while the participation of the “Note Colorate” White Voices Chorus directed by Giovanni Mundo is also expected. the souls of children killed by the mafia.

The lights designed by Vito Schiattareggia will illuminate the magnificent façade of the Church of San Nicolò l’Arena. The event, which takes place in co-production with the Taormina Arte Sicilia Foundation, will be enriched by the exhibition organized by Ansa “The Legacy of Falcone and Borsellino”, which tells with texts and images, even unpublished, the life of the two great magistrates . The exhibition includes the installation of photos and panels with images taken from the ANSA archive and from private family albums to continue to remind, especially to the younger generations, the moral and civil message left by the two eminent personalities. “An extraordinary closure for the 2022 Festival, which combined beauty, art, and, through the final event evening, also civil commitment and a dutiful memory and which has established itself as the musical and artistic season of reference for the south, giving beauty and harmony and “Awakening” with the power of great music “.