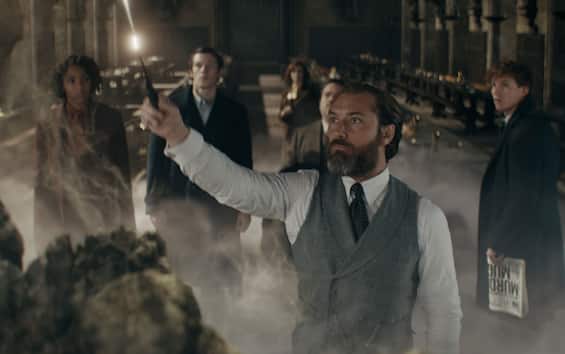 Arrives on the first TV on Sky FANTASTIC BEASTS – DUMBLEDORE’S SECRETS, the new Wizarding World™ adventure created by JK Rowling, Monday 26 December at 21.15 on Sky Cinema Uno and Sky Cinema 4K (and at 21.45 on Sky Cinema Harry Potter), streaming NOW and available on demand, also in 4K quality . The film was distributed in Italian theaters by Warner Bros. Pictures.

Professor Albus Dumbledore (Jude Law) knows that the powerful dark wizard Gellert Grindelwald (Mads Mikkelsen) is intent on taking over the wizarding world. Unable to stop him alone, Dumbledore entrusts magizoologist Newt Scamander (Eddie Redmayne) to lead an intrepid team of wizards, witches and a brave Muggle baker on a dangerous mission, where they encounter creatures old and new and collide with the growing legion of Grindelwald’s followers. With the stakes so high, how long can Dumbledore sit on the sidelines?

And to celebrate this great premiere, until Saturday 31 December Sky Cinema Family becomes Sky Cinema Harry Potter, a channel entirely dedicated to the most beloved little wizard on the big screen, with the 8 films of the Harry Potter film saga, born from the pen of the writer JK Rowling and starring on the big screen by Daniel Radcliffe, alongside Emma Watson as Hermione Granger, Rupert Grint as Ron Weasley, Alan Rickman as Professor Severus Snape and the recently deceased Robbie Coltrane as Hagrid.

It was 2001 when the first chapter of the saga was released in theaters, HARRY POTTER AND THE PHILOSOPHER’S STONE directed by Chris Columbus, which obtained record box office receipts and which narrates the difficult childhood of little Harry in the world of “muggles” and his arrival at Hogwarts School of Witchcraft and Wizardry.

The following year it came out HARRY POTTER AND THE CHAMBER OF SECRETS still directed by Columbus, in which Harry, having returned to the school of magic after the holidays, faces a diabolical presence that petrifies his victims and must discover the terrible secret of a mysterious room.

In 2004 Alfonso Cuarón signed the direction of HARRY POTTER AND THE PRISONER OF AZKABAN giving the setting a darker atmosphere and a more adult imprint on the narrative. Here Harry has to face the dangerous criminal Sirius Black (Gary Oldman), who has just escaped from Azkaban prison.

The direction was entrusted to Mike Newell for the fourth chapter of the saga, HARRY POTTER AND THE GOBLET OF FIREin which Harry prepares for the return of the dark Voldemort (Ralph Fiennes) between magic tournaments, dances and love turmoil.

HARRY POTTER AND THE ORDER OF THE PHOENIX it marked the directorial entrance of David Yates, who also directed the subsequent films. In this fifth chapter, before a prophecy decides his fate, Harry discovers the existence of a secret association that wants to kill Voldemort, whose return looms over Hogwarts.

It was 2009 when it came out at the cinema HARRY POTTER AND THE HALFBLOOD PRINCE. In this sixth adventure, Harry finds a mysterious manual that belonged to the Half-Blood Prince through which he learns the secrets of black magic, but to defeat Voldemort he will need a memory kept by Professor Slughorn (Jim Broadbent).

It is not to be missed in programming HARRY POTTER 20TH ANNIVERSARY: RETURN TO HOGWARTS

FANTASTIC BEASTS – DUMBLEDORE’S SECRETS – Monday 26 December at 21.15 on Sky Cinema Uno and Sky Cinema 4K (and at 21.45 on Sky Cinema Harry Potter), streaming on NOW and available on demand, also in 4K quality.