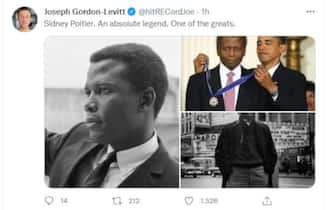 Sidney Poitier, Hollywood legend, died at 94. Actor, director but also diplomat, he was the first black artist to win the Oscar for best actor and paved the way for many African American colleagues. As soon as news of his death spread, many celebrities wanted to pay tribute to him on social media. Among the first to do so, the actor Joseph Gordon-Levitt, who defined it: “One of the greatest”

Also Whoopi Goldberg paid tribute to Sidney Poitier: “He showed us how to reach the stars,” he wrote

Not just artists. Also Barack Obama paid tribute to Sidney Poitier, who “opened the doors to a generation of actors”

Viola Davis thanked him for being an inspiration and remembered it with a phrase that the actor said to her: “If your dreams don’t scare you, they’re not big enough”

Elijah Wood called him a “revolutionary”

The homage of Mark Ruffalo

The homage of Mia Farrow, who chose the photo in which Sidney Poitier is awarded the Presidential Medal of Freedom by Barack Obama

The memory of the actress Marlee Matlin

“Rest in peace. And thank you ”, concludes the message of Questlove

The homage of Tyler Perry

The homage and thanks of Anika Noni Rose

Also Magic Johnson, one of the greatest basketball players of all time, wanted to pay homage to the “legend” Sidney Poitier

Tributes also from Italy, like this one from Alessandro Gassmann