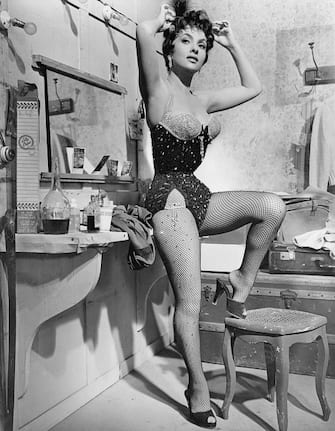 Gina Lollobrigida died. A great protagonist of Italian cinema, she was born in Subiaco on 4 July 1927,

Her real name was Luigia

Gina Lollobrigida is one of the greatest divas ever in the world.

On February 2, 2018, the actress receives a star on the Hollywood Walk of Fame.

Just seventeen, Lollobrigida played the role of Corinna in the comedy Santarellina by Eduardo Scarpetta, staged on Friday 8 September 1944 under the direction of Luigi Tenneroni at the Teatro della Concordia in Monte Castello di Vibio, the smallest Italian-style theater in the world. In 1947 she was the protagonist (again under the pseudonym of Diana Loris) in one of the first two Italian photo novels: In the bottom of the heart, published in installments in the magazine Sogno.

The actress began her film career first as an extra and stunt double, and later in small supporting roles in the popular operatic films of the immediate post-war period.

In 1950 Gina Lollobrigida flew alone to Hollywood, accepting the invitation of the billionaire Howard Hughes, producer and discoverer of divas like Jane Russell. When she discovered that she was about to be locked in a gilded cage she hurried back to Rome. The exclusive contract that she had already signed prevented her from working in the United States until 1959, but not in US productions shot in Europe, as in fact happened later.

Among his early successes, Bells a hammer (1949) by Luigi Zampa, Achtung! Bandits! (1951) by Carlo Lizzani, Passport to the East, directed by various directors, and above all Fanfan la Tulipe (1952) by Christian-Jaque (Silver Bear at the Berlin Film Festival), which made her a star in France; in the same year in Italy she gained vast popularity with Altri tempi by Alessandro Blasetti, in the episode The trial of Phryne with Vittorio De Sica, who coined the neologism physics increased for her.

In 1953, again alongside Vittorio De Sica, she played the character of the Bersagliera, awarded with the Silver Ribbon and nominated for the BAFTA, in Bread, love and fantasy by Luigi Comencini (Silver Bear at the Berlin Film Festival), entering definitively in the collective imagination thanks to the pleasant and spontaneous characterization of the beautiful poor commoner with a heart of gold but at the same time resolute and determined.

Having reached the heights of fame, the following year he shot the equally successful sequel, Bread, love and jealousy also by Comencini, but in 1955 he refused to star in Bread, love and… by Dino Risi, the third chapter of the series, and she was replaced by Sophia Loren, her historic “rival” according to the press of the time.

In the following years the actress tackled various roles that revealed the attempt at dramatic and more mature deepening of her interpretations, such as in La provinciale (1953) by Mario Soldati, La romana (1954) by Luigi Zampa, which made her win the Grolla d gold in Saint Vincent, Crazy Sea (1963) by Renato Castellani and A Beautiful November (1968) by Mauro Bolognini, considered among her best performances, at least as a dramatic actress.

From the early 1950s La Lollo, so nicknamed by the press, became the star of international Hollywood productions such as The Treasure of Africa (1953) by John Huston, with Humphrey Bogart and Jennifer Jones, The Master of Don Giovanni (1954) by Milton Krims, alongside Errol Flynn

In 1955 she starred in The Most Beautiful Woman in the World (1955) by Robert Z. Leonard, paired with Vittorio Gassman, a biographical film that fictionalizes the life of soprano Lina Cavalieri. In this role, Lollobrigida also performed well as an opera singer and she won the David di Donatello for best leading actress, an award that the Academy of Italian cinema instituted that very year.

In 1956 she starred in Carol Reed’s drama Trapeze, alongside Burt Lancaster and Tony Curtis, which was a great success, followed by Jean Delannoy’s The Hunchback of Notre Dame (1956), where she played a splendid and sensual Esmeralda alongside Anthony Quinn as Quasimodo, Sacred and Profane (1959) by John Sturges, alongside Frank Sinatra and Steve McQueen, Solomon and the Queen of Sheba (1959) by King Vidor, with Yul Brynner (who had to replace Tyrone Power who died during filming ) and George Sanders.

In these years he also participated in two less successful films at the box office, but appreciated by the critics: Anna di Brooklyn (1958) by Vittorio De Sica and Carlo Lastricati and The Law (1959) by Jules Dassin, where he acted together with Marcello Mastroianni, Yves Montand and Melina Merkouri.

In 1961 he filmed Go naked through Ranald MacDougall’s world, alongside Ernest Borgnine and Anthony Franciosa; in the same year, with her Back in September by Robert Mulligan, in which she starred with Rock Hudson, Bobby Darin and Sandra Dee, she won a Golden Globe as best actress in the world. She attended the 1961 Oscar ceremony, hosted by Bob Hope, delivering the Academy Award for Best Director to Billy Wilder for the film The Apartment.

in 1962 she starred with Stephen Boyd in the costume film Imperial Venus by Jean Delannoy: the role of Pauline Bonaparte earned her a David di Donatello and a Silver Ribbon as best leading actress

In 1964 he worked on Basil Dearden’s The Straw Woman. The following year it was Melvin Frank’s Strange Bedfellows. In those years he acted in Italian films such as The beauty of Ippolita (1962) by Giancarlo Zagni, Io, io, io… e gli altri (1966) by Alessandro Blasetti, The pleasant nights (1966) by Armando Crispino and Luciano Lucignani and Death Made an Egg (1967) by GiulioQuesti, both in foreign productions, such as Hotel Paradiso (1966) by Peter Glenville, L’amante italiana (1966) by Jean Delannoy, and The Adventures and Loves of Miguel Cervantes ( 1967)

In 1968, thanks to her performance in Melvin Frank’s Good Evening, Mrs. Campbell, she received a Golden Globe nomination for Best Actress in a Comedy or Musical and a third David di Donatello Award for Best Actress. Also in 1968 she guest starred in Frank Tashlin’s satirical Mash, starring Bob Hope and Phyllis Diller. She later also tried her hand at spaghetti-western taking part in And they kept screwing the million dollars (1971)

In 1972 he starred with David Niven in A welcome guest … for my wife by Jerzy Skolimowski. The following year, after a participation in Mortal Sin by Francisco Rovira Beleta, she moves away from the cinema screens, to which she will return only in 1995 with the film One Hundred and One Nights by Agnès Varda, where she played the wife of Jean-Paul Belmondo, followed from a brief appearance in Ariel Zeitoun’s XXL (1997), starring Gérard Depardieu.

In 1972 she played the Blue Fairy in the successful The Adventures of Pinocchio by Luigi Comencini,[whichrepresentsthedebutoftheactressinatelevisionproduction.Evenattheheightofherpopularityfromthefollowingyearshebegantoreduceherappearancesonthescreenstodevoteherselftophotography

In 1984 he participates in the TV series Falcon Crest, they get a Golden Globe nomination. In 1985 she always for American TV she starred in the television miniseries Deceptions and in 1986 she was the guest star of two episodes of Love Boat. In 1988 was the television remake of La romana directed by Giuseppe Patroni Griffi. After that he limited himself to appearing occasionally on television and in the cinema, and only in cameo roles, in the French comedies One Hundred and One Nights, directed by Agnès Varda (1995), and XXL, directed by Ariel Zeitoun (1997), and in the fiction A woman on the run.

In 1996 she was awarded the David di Donatello for her career and in 2006 she obtained a special recognition on the occasion of the fiftieth anniversary of the trophy of which she had been the first winner in 1956. In October 2010 she was a guest of Pippo Baudo in the Novecento broadcast.

In 2011, after 14 years of absence in the cinema, he returned to the big screen with an extraordinary participation in the film Box Office 3D – The film of films, directed by and starring Ezio Greggio. At the end of the same year, for the first time together on the big screen, Gina Lollobrigida and Sophia Loren were among the protagonists of the documentary Schuberth – L’atelier della dolce vita by Antonello Sarno.