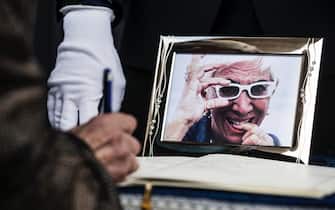 They were held today at Rome, at the Church of the Artists, the funeral of Lina Wertmuller, the missing Italian director a 93 years old last December 9th

WATCH THE VIDEO: Lina Wertmuller, the funeral home in the Capitol

Farewell to Lina Wertmüller, funeral parlor in the Capitol: greetings from friends and relatives. PHOTO

“Today we remember it, let’s do it without any rhetoric – he said Giuliana De Sio (pictured) upon his arrival -. We also sang in the funeral home yesterday. We are serene. Lina went well without suffering, she lived free as she wanted. We have to celebrate it”

Between the many crowns, those at the entrance of the church of Guido Lombardo and of the Titanus and of Rome Capital

The funeral of the first director woman Oscar nominated

The Italian actor also paid tribute to her Giancarlo Giannini

Elizabeth Village arrived at the director’s funeral. The father Paolo Villaggio he toured with Wertmuller in 1992 “I hope I get along”

The director’s coffin is covered with red roses and white flowers, there is one of his photo and his eyeglasses from the white frame