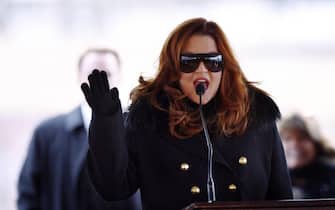 Lisa Marie Presleythe only child born from the relationship between Elvis and Priscilla Presley, is died at the age of 54following cardiac arrest. To report the news of his disappearance, the January 12, 2023was the mother. “It is with a heavy heart that I must share the devastating news that my beautiful daughter Lisa Marie has passed away,” Priscilla Presley said in a statement, describing her daughter as “the most passionate, strong and loving woman I have ever known.”

Lisa Marie Presley died of a heart attack, she was 54 years old

Lisa Marie Presley was born on February 1, 1968 to Memphis, Tennessee, exactly nine months after her parents’ wedding date. After their separation, finalized in divorce in 1973, she lived with her mother in Los Angeles, California. At just 9 years old, the August 16, 1977Lisa Marie loses her father: Elvis Presleyat 42, died for a heart attack at Graceland, his estate in Memphis. Pictured: Elvis, Priscilla and Lisa Marie Presley

From 1978 to 1984, Lisa Marie’s mother began a relationship with the actor Michael Edwards. In the future it will be discovered that they weren’t easy years: in the book Priscilla, Elvis and Me (1988), Edwards recounts his turbulent relationship with Priscilla Presley, marked by the cumbersome presence of drugs and the ghost of her ex-husband, and reveals that he had sexually approached little Lisa Marie, who he will confirm in the following years that he has suffered sexual harassment

Elvis, the cast of the film by Bar Luhzmann. PHOTO

The only heir to Elvis’ fortune, Lisa Marie Presley married the musician in 1988 Danny Keough, from which children Riley and Benjamin Storm Keough were born. The two divorced in 1994. Only a few days later, Lisa Marie ends up on the front pages of tabloids around the world: her relationship with Michael Jackson

The two were already married in 1994. These were difficult years for the King of Pop, dealing with allegations of sexual harassment of minors and with a strong addiction to drugs that led him to rehabilitation. Meanwhile, in 1995, Lisa Marie appears in the video of You Are Not Alone of the husband. The marriage between the two ends in 1996

In 1997 Lisa Marie Presley approaches music for the first time, singing on the notes of her father’s song Don’t Cry Daddy, presented on the occasion of the twentieth anniversary of his death. In 2000 Lisa Marie Presley dates another musician, John Oszajca. She then she meets the actor Nicolas Cage, whom he marries on August 10, 2002. A little over three months later, the two separate. The divorce is finalized in 2004

Meanwhile, Lisa Marie Presley releases her first music album. It’s 2003 when it comes out To Whom It May Concernwhich reaches the fifth position of the most purchased albums in the United States and wins the gold disc for having sold 500,000 copies

Two years later it comes out Now What. This album also enters the US charts at number 9. His third and final album, Storm&Graceis from 2012

The marriage between the two ends in 2016 and the divorce is finalized in 2021, in the midst of a fierce legal battle for custody of the daughters: Lisa Marie Presley dumped her husband claiming she found images and video footage of child pornography on Lockwood’s devices. However, the allegations have never been confirmed in court

In 2020, Lisa Marie loses her son Benjamin Keough, born of his first marriage. The boy commits suicide at the age of 27

In the last years of her life, Lisa Marie admits that she was in rehabilitation five times to cure drug addiction. For years he used cocaine and opiates. L’last public appearance It dates back to January 10, 2023: only two days before his death he had participated in Golden Globes

Famous people who died in 2022