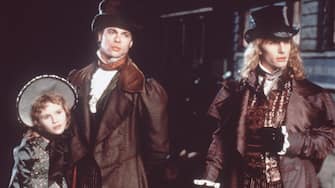 Interview with the Vampire: The Vampire Chronicles is certainly the most famous film based on the novels of Anne Rice. Directed in 1994 by Neil Jordan, the film stars Tom Cruise as Lestat de Lioncourt and Brad Pitt as Louis de Pointe du Lac. To remember the presence of a very young Kirsten Dunst in the role of Claudia, a child vampire

Farewell to Anne Rice, the writer of Interview with the Vampire

Interview with the vampire, thanks also to the presence in the cast of Antonio Banderas in the role of the vampire Armand, was a huge success at the box office and attracted the attention of the world of cinema to the books of Anne RIce.

In Interview with the Vampire, the role of the character of Daniel Molloy played by Christian Slater plays a fundamental role. And the fact that Anne Rice has included a reporter in this vampire saga speaks volumes about what the writer thought about a certain type of journalism.

Queen of the Damned is a 2002 film directed by Michael Rymer, based on the novel of the same name by Anne Rice (with some parts taken from Chosen from the darkness, by the same author).

Despite a great soundtrack and a cast of Stuart Townsend: Marguerite Moreau Aaliyah Vincent Pérez, this horror based on Anne RIce’s books was a box office fiasco.

The Young Messiah is a 2016 film directed by Cyrus Nowrasteh, based on the novel Christ the Lord: Out of Egypt by Anne Rice and starring Adam Greaves-Neal, Sean Bean, David Bradley, Lee Boardman, Jonathan Bailey and David Burke. the work revolves around the story of Jesus at the age of 7, who tries to discover the truth about his life after his return to Nazareth from Egypt.

Note in this film, taken from the book by Anne Rioe, the participation of Sara Lazzaro (The Young Pope) who plays Mary of Nazareth

Exit to Eden is a comedy thriller streak directed by Garry Marshall in 1994. The film is the film adaptation of Anne Rice’s novel Exit to Eden.

Directed by Peter Medak in 2001, the cast of The Feast of All Saint is made up of Peter Gallagher, Gloria Reuben and Jennifer Beals

Based on a story by Anne Rice, Rag and Boen is a TV movie directed by James D. Parriott in 1998