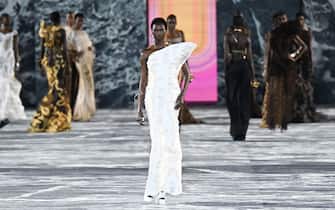 Great show at the Jean Bouin Stadium in Paris, a structure that can host up to 20 thousand people, for the presentation of the Balmain collection for next summer. On the catwalk, the designer Olivier Rousteing sends over a hundred looks, all surprising and impressive

There is not a single theme in this men’s and women’s collection, which mixes ready-to-wear and couture garments. The red thread is, plausibly, the sustainability of some creations, made with paper, wicker and banana fibers

Paris Fashion Week, the tops in the front row at the Saint Laurent fashion show. PHOTO

Rousteing stressed the urgency of the climate emergency. The flames, one of the themes of the collection, are a clear reference to the hot summer that this year has not even spared his country, France

It is possible that through these garments, presented in a spectacular atmosphere, they represent the overcoming, for the designer, of a truly delicate phase in his life. Rousteing, in 2020, had been the victim of a serious domestic accident, a fire, as a result of which he had suffered severe burns. The experience, which profoundly marked the creative, was told via social media only at the end of 2021

Flames and images of a celestial paradise alternate in a collection that should be read both in terms of lines and shapes and that of motifs. Like many other designers in recent seasons, even Rousteing has not resisted the revival of the overbearing style of the early 2000s

Paris Fashion Week: the looks at the Calzedonia event

Cara Delevingne, the public return to Paris after the shock photos at the airport

Much of the look is a reflection on overlaps. The combined garments reveal interesting mixes of prints and patterns but are nevertheless composed according to a certain chromatic uniformity

Also this time from the Maison Balmain comes a collection that reveals a very precise study of volumes. The over and over-the-top ones are evidently Rousteing’s favorites right now

However, there are also garments that adhere to the body like overalls. Brightly colored, they give the illusion of body art

Certainly worthy of attention, the accessories that complete the clothes. The shoes with maxi plateau, in rubber and with a very varied shape, elevate the models to a considerable height and strike the viewer

Even the jewels are characteristic and reveal another inspiring motif, the indigenous culture, always present in the fashion of Rousteing, French but born to parents of Somali and Ethiopian origins. The biographical story of him is told in the documentary Wonder Boy: Olivier Rousteing (2019)

Well-known faces of fashion parade on the catwalk: Kristen McMenamy and Ashley Graham

The show that opened with a message from Cher ends, incredibly, with the presence of the actress and singer herself. The icon reaches the stylist for the final release in a super tight dark leotard

Cher, born in 1946, accompanied her stylist friend by the hand for one last triumphal catwalk. The music and screen star, born in 1946, wore a futuristic look complemented by metal-effect eyeshadow

One last shot for the designer, Olivier Rousteing, symbol of Balmain