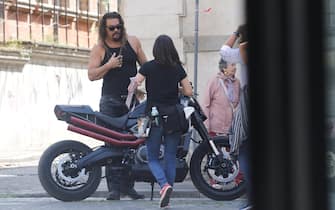 Filming of Fast and Furious 10 is taking place in Rome, which will see Vin Diesel return to play Dominic Toretto. In town, Joseph Jason Namakaeha Momoa has also arrived, who will be a “bad boy” in the film.

WATCH THE VIDEO: Jason Momoa will be the villain in Fast and Furious 10

“It is extraordinary. He is irritable. He is misunderstood “, Momoa said a few weeks ago talking about her character, adding that he was excited about the possibility of visiting extraordinary places for this job.

Fast and Furious 10, the words of Jason Momoa on the film

In the tenth chapter of the saga, Momoa will work alongside international stars such as Brie Larson and Charlize Theron

Fast and Furious 10, the photos of Charlize Theron from the backstage of the film

To direct this new adventure will not, however, Justin Lee who at the end of April announced that he had abandoned the project. “I am proud to have helped build the most inclusive franchise in the history of cinema. I will always be grateful to the fabulous members of the cast, crew and studio for their support and for welcoming me into the family, “he added.

Fast & Furious 10, Justin Lin leaves the direction of the film. Hunt for the substitute

Vin Diesel said the film will be shot in “many new locations” around the world. Before making a stop in Rome, the troupe has already shot some scenes in London

Momoa has played several characters in her career. Among the best known are that of Ronon Dex in the series Stargate Atlantis and that of Khal Drogo ne Game of thrones

In Momoa’s projects there is no c’it’s just the acting. It will also contribute to the production and the screenplay by Chief of War, a new series focusing on indigenous people who will tell the events that led to the unification and colonization of the Hawaiian Islands. Momoa, who was born in Hawaii in 1979, will also be the protagonist

Jason Momoa will write, act and produce a TV series about the colonization of Hawaii