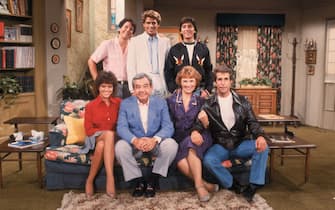 On March 19, the father’s Day and there are many TV series in which the role of the father is decisive for the unfolding of the story or to characterize another character. It is certainly one of the first parents to enter families around the world Howard Cunningham Of “Happy Days“who, in addition to his sons Richie and Joanie, also dispenses advice to all their friends who pass by the house or to the legendary club” Arnold’s ”

One of the most admired fathers of TV can only be Jack Pearson Of “This is Us“. His three children were born on his birthday and he gives up everything for them and his family, making them feel deeply loved. He supports and holds them together by trying to respect their diversity and encourage them to overcome their fears. and weaknesses

Funny, playful, sensitive and very attached to his children, Phil Dunphy Of “Modern Family ” he is probably the father that everyone would like to have. He considers himself a cool dad and does not hesitate to tell him again and gets terribly depressed if someone criticizes him for being his parent, or if he can’t help one of his children in a difficult time.

Modern Family, how the characters have changed from the first to the last season

Another dad that fans have loved is Fred Andrews Of “Riverdale“, played by the late Luke Perry. Archie’s father, he is very attached to the son to whom he would like to leave the construction company. The boy instead wants to become a musician and this creates conflict between father and son, until Fred changes his mind. about Archie’s talent

Riverdale 5, the first photos after the time jump

In “Gossip Girl “Ruphus Humphrey he is probably the only recurring father figure who is really active in raising children. Divorced, he doesn’t belong to the Manhattan elite and tries to teach Dan and Jenny to pursue their dreams but always keep their feet on the ground

Gossip Girl, revealed on Instagram cast and characters of the reboot

Neither “Game of thrones” there are various families contending for the throne of the Seven Kingdoms. But among the figures of the fathers who stand out most, we cannot fail to mention two opposite characters: Ned Stark, the lord of Winterfell, loving, courageous and honest father; as opposed to Tywin Lannisterlord of Castel Granito, shrewd, cold, calculating and despotic father and tyrant

In “How I Met Your Mother “ the children of the protagonist Ted Mosby they rarely see each other, but it is thanks to them that the father tells the whole story that led him to meet the mother of his children and to clarify his feelings

Not only an exceptional father, but also a strict and super patient uncle: he is serious (but in the end not too much) Phil Banks Of “Willy, the Prince of Bel Air“, grappling with the various problems of his children to which is added the extravagant nephew Willy

“Here is the story of a wealthy family that lost everything, and of the only son who had the opportunity to keep it together”: this is the introductory phrase of each episode of “Arrested Development “. And that one son is, in reality, Michael Blutha young widowed father who runs the family business and takes the place of his father and all the particular components of his nucleus, starting from the spoiled parents up to the brothers

Walter White in “Breaking Bad” he is willing to do anything for his family. A chemistry professor with a minimal salary, when he discovers he has cancer he decides to become an amphetamine manufacturer to earn a large sum to leave for his wife and child after his death. Things will then degenerate …

Mitch Leery is Dawson’s ever-present father in “Dawson’s Creek“. All his certainties waver after the discovery of his wife’s betrayal, but in the imagination remains the symbol of the good father with the propensity to sacrifice

The best known father in the world can only be Homer from “The Simpsons”. Not really a model dad, but perhaps one of the most authentic of the TV series

In the ranking of fathers, not really a model, it also falls Tony Sopranoplayed by James Gandolfini, in “The soprano“. Carmela’s unfaithful husband, has two children: Meadow and Anthony Jr.

Another example of a father different from the previous ones is Jim of “Life according to Jim“. Lazy and immature, he is still a very present and very funny dad

Eric Camden is probably the father with the most numerous offspring: in “Seventh heaven” he has 7 children, as well as being the spiritual father of the entire community as a reverend. Eric is calm, wise, and something of a parent-mentor to his kids

Sandy Cohen Of “The OC“he is instead a father with a youthful attitude, very understanding and selfless both with his son Seth and with his adopted son Ryan

In “The Walking Dead “ the figure of the protagonist emerges Rick Grimesa protective and determined father who, in order to save his son Carl, bites off the neck of one of the men who held them hostage

In “All in family” the character of Michael it is among the most loved. Nice father, cheerful and great user of irony to push his children to independently find solutions to their “misdeeds”

Finally there is Burt Hummel Of “Glee “a sensitive father with a great sense of humor, accepts without hesitation the homosexuality of his son and supports him despite the prejudices of others