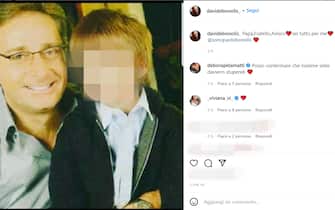 On the occasion of Father’s Day, many VIPs have decided to publicly wish their children’s fathers and parents their best wishes. Davide Bonolisthe teenage son of the showman Paolo, fished out a photo of him as a child with his father and posted it on Instagram

The career of Paolo Bonolis

Even the actor Paolo Conticini posted a photo of his father, accompanied by the caption: “W all the fathers but mine most of all !!! W Ugo”

In the Ferragnez house today two holidays are celebrated: that of the father and the birthday of the first-born Leone, born four years ago. For the occasion, Chiara Ferragni has published a photo that portrays them together and thanked her husband for having created “this dream” with her, calling him “the best dad in the world for our puppies”

Fedez reveals he is sick, the messages of closeness on social networks. PHOTO

Double party even at home Brignano-Canto. “Today is an important day .. our little mouse is 8 months old, but especially today all the fathers in the world are celebrated”, wrote the showgirl, also wishing her father.

Enrico Brignano, from theater to TV: the actor talks about himself on Sky Tg24

Cristina Marino wished him well Luca Argentero publishing a photo of him with his daughter, Nina Speranza. The actress also posted another image where she is with her father, who passed away this year

Luca Argentero, from Big Brother to DOC – In your hands: how it has changed. PHOTO

Double wishes also came from Matilda Lutz. In an Instagram post portraying her father and husband, the actress thanked the first of her for teaching her that she can always continue to learn and the second of her for being “the best father that Oliver. [il figlio della coppia] could ever ask ”

Costanza Caracciolo did the same, publishing on her profile a succession of images of Bobo Vieri accompanied by the caption: “Our daughters could not have had a better father .. THANKS 🤍💕🦋⭐️ Best wishes to my dad too, I couldn’t ask for more! 🍀 # luckygirls ”

Clizia Incorvaia instead wished Paolo Ciavarro, with whom she had her son Gabriele. For the partner it is the first Father’s Day

Also for Marco Roscio, husband of Cristina Chiabotto, this is the first Father’s Day. The former Miss Italy honored him with a video on Instagram made up of all photos with her daughter, Luce

Today the former historian of Chiabotto is also a father, Fabio Fulco. To congratulate him, the current partner Veronica Papa has chosen a series of photos that portrays him with his daughter, Agnes, accompanied by a long caption that begins with the phrase “The only thing better than having you as a life partner is that our daughter has you as Dad “