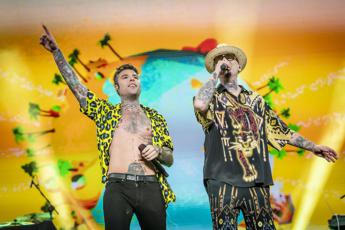 Six-hour musical marathon, 20 thousand in Piazza del Duomo for a charity concert that raises funds in favor of Tog

A party for Milan and for music. Which not even the threat of rain can stop. When he gets on stage, among the last in the lineup, Fedez jokes about: “Ax and I had a fight and so I will sing this song alone”. And instead here he is J-Ax, who comes out of the backstage excited: “Really? Really? – he says -. I’m speechless for the first time, let’s play”. ‘Love Mi’, the free concert promoted to raise funds for the Tog -Together To Go non-profit organization, a center of excellence in the rehabilitation of children suffering from complex neurological diseases, is an unparalleled success. Not only because for six hours on the stage set up in Piazza del Duomo several generations of artists perform, from the big names to the new stars, but because this musical marathon is the demonstration that together everything is possible.


This is demonstrated by the crowd of Milanese and young people from all over Italy who cannot hold back the enthusiasm for having rediscovered their idols in a live appointment, which turns into a music festival for the city, in front of almost 20 thousand people. And this is demonstrated by the friendship found between Fedez and J-Ax, which after four years of silence and broken relationships, is more solid than ever. Peace made, therefore, between the two artists. With them families, loved ones, Fedez’s wife, Chiara Ferragni, present under the stage with her sister Valentina. And then some of the old friends.

To open the concert, conducted by Elenoire Casalegno and Aurora Ramazzotti with Gabriele Vagnato, is Caneda, who immediately attacks with ‘The golden boy’, to then pass the baton to Mydrama, who performs in ‘Soli’ and ‘Mantra’ . Frada starts with ‘Mosca’ and gets consensus with ‘Sotto tua casa’. Cara is joined on stage by the first special guest of the evening, Chadia Rodriguez, with whom she performs in ‘Preferisco te’ and ‘Come mai’. Then come Paulo, Beba and Rosa Chemical, who, wrapped in a black and white optical onesie, makes the whole square dance with ‘Britney’, ‘Polka 2’, ‘Polka 3’, ‘London’ and ‘Polka 1’.

Rose Villain appears on stage and ignites the live with songs like ‘Gangsta’, Piango sulla Lambo ‘and’ Chico ‘. The square is a carpet of raised arms and sings in chorus. The dj-set is then entrusted to Miles and Anna, who leave room for Mara Sattei and Nitro, (he in a t-shirt with the writing ‘Keep Abortion safe and equal’, in reference to the decision of the American Supreme Court) and another special guest, Vegas Jones. Ariete and Rhove are then protagonists first of Paky, Shiva and Dargen D’Amico, then off to the showman of the charts, Rkomi, who brings ‘Maleducata’, ‘I what I believe’ and ‘Where to dance’ to the stage. It is then the turn of Myss Keta, who in an animalier suit and the inevitable metal mesh mask dropped on her face, makes the whole square dance to the rhythm of ‘Finimondo’, ‘Scandalosa’, ‘Pazzeska’ and ‘Full’ . Lazza instead inflames the crowd with six songs before the conductors announce Ghali’s arrival. When it’s his turn the square explodes. He attacks with ‘Fortuna’, the single from the latest album and then some of the most loved songs by the public, ‘Come Milano’, ‘Pare’, Good Times ‘and the medleys of’ Boogieman / Wallah ‘and’ Ninna Nanna / Dende ‘.

Tananai is a volcano of energy with ‘Exaggerated’, ‘Casual Sex’, ‘Pasta’, June ‘and’ Baby Goddamn ‘. Then the highlight of the evening. The conductors announce Fedez and J-Ax, and a stadium choir starts in the crowd. The square is transformed into an open-air disco for the two newly found friends: screams, sweats, gets excited and sings all the songs from memory: ‘I would like but not place’, ‘Spirale ovale’, ‘Domani smetto’, ‘Italiana’ , while the last special guests take to the stage with the two artists, including Jake La Furia, Levante and Orietta Berti. She is the super star of the evening, for which the square goes crazy: ‘Orietta, Orietta!’ shouts the audience in unison. And she plays the game: “Good evening guys, how beautiful you are”. She then she shakes hands with J-Ax and turning to Fedez she says: “When I see you I’m always fine. Tonight I’m very bubbly”.

The evening is a party within a party, dancing and singing for over six hours outdoors, sharing emotions and thrills. A unique event not only for Milan but also for the world of music, which for one evening finds itself united on stage with an important and concrete goal, do good, together. The encore? Who knows … to the direct question Fedez comments ironically: “Now let me finish this concert”. (by Federica Mochi)