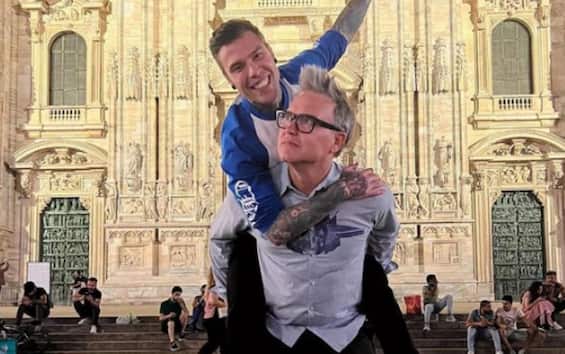 For Fedez life is returning to a beautiful normalcy. On March 22, the singer underwent an urgent operation to remove a rare neuroendocrine tumor in the pancreas. The surgery was perfectly successful, with Fedez then documenting the entire post-operation, where he shows the scar on his abdomen. On Monday 16 May, less than two months after the surgery, Fedez returned to the place where he feels most at ease, that is, on stage. Indeed, the singer has a duet with his colleague Tananai on the occasion of the latter’s concert, during which he also announced a new song with him. As if that weren’t enough, on the evening of Thursday 19 May Fedez spent another unforgettable evening.

Together with his wife Chiara FerragniFedez spent an evening with Mark Hoppus, bassist and leader of Blink 182. The Italian singer has documented everything through photos and stories on Instagram, where he can be seen walking through the streets of Milan rather amused together with Mark Hoppus, who calls out his name regardless of the people present. Between the two, moreover, another surprise presence stands out at the dinner, namely that of Giacomo Poretti part of the comic trio Aldo, Giovanni and Giacomo, who jokes by claiming to be one of the members of Blink 182. Once back home, Fedez told his followers the thrill of having shared some time with what was one of his idols. Even more exciting is the passage in which Fedez explains that he approached Mark Hoppus once he learned of his tumor, also because the leader of Blink 182 has had a similar experience in the past. As if that weren’t enough, Hoppus himself wanted to give him one brooch they only have Travis Barker and Tom DeLongeother members of Blink 182. A gesture that touched Fedez, who shamelessly declared that he cried like a baby once he received this gift that he will certainly treasure jealously.

The “backstage” of the meeting between Fedez and Mark Hoppus

As if that were not enough, always through a series of Instagram stories, Fedez wanted to immortalize the moments that preceded his meeting with the bassist of Blink 182. We see the Italian singer visibly excited at the thought of meeting his idol and, once seen live, he began to remember by heart all the dialogues present in one of the Blink 182 albums, having fun and not a little Mark Hoppus. In conclusion, Fedez wanted to get a smile from all his fans by publishing a photomontage of Giacomo Poretti, among the protagonists of the dinner, on a fully tattooed body. In short, an unforgettable evening for Fedez and his wife Chiara Ferragniwho after difficult days and worries about the delicate intervention, are rediscovering the serenity and lightheartedness that comes from a normal life, with Fedez who has also resumed training in the gym, synonymous with how the great fear is now behind them.