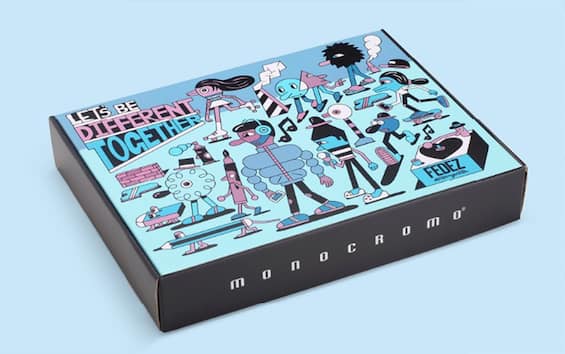 The large family of Pigna paper mills has chosen Fedez as creative director of the line Monochrome, one of the leading brands that is aimed mainly at young people and very young students, a target perfectly in line with the one with which Fedez converses on a daily basis through his social networks and his songs. Another entrepreneurial activity, therefore, for the Ferragnez family, increasingly sought after and pursued by brands wishing to exploit their appeal to the masses. In fact, although the real entrepreneur of the family is Chiara Ferragni, who over the years has been able to build a millionaire empire with her brand but also becoming ambassador and testimonial of other realities, Fedez is also a coveted goal for companies that want to sponsor their products. , as Pigna demonstrates, who with the agreement with the rapper strengthens an already existing commercial agreement with the Ferragnez family, given that Fedez’s wife has been collaborating with the paper mill for some time to create its branded stationery line.

The collaboration between Fedez and Pigna for Monochrome

It should therefore not be surprising that the choice fell on the rapper, as he well explains Massimo Fagioli, CEO and President of Cartiere Paolo Pigna: “We were looking for someone who could speak the language of the new generations, expressing their world through words, images, colors. Who better than Fedez, who knows how to combine artistic spirit and knowledge of the digital world to transform ideas into creative content accessible to a wide and diverse audience? “.

Fagioli, therefore, underlines that this is not a simple line branded by Fedez but a much broader project, which involves “developing projects together, expanding the product range in new areas, concretizing messages and activating collaborations capable of leaving their mark. “. There is also enthusiasm on the part of Fedez: “Being creative director of Monocromo is a path that I am living with a lot of enthusiasm. The fact that a historic Italian brand has chosen to give me carte blanche – in every sense! – to determine his creative direction by putting my passions and my digital know-how into play for me is really a source of pride “.

The first Fedez collection for Monochrome

The collaboration started with a charity initiative to support the Tog association, of which Fedez has been a testimonial for some time. The first project involves the sale of a box in a limited edition of 1000 pieces that contains a diary, a sketchbook and a brush pen. The purchase is only possible via the internet on the website www.monocromo.eu. The box was created in collaboration with the artist Jeremyvillewho created exclusive graphics for the occasion.