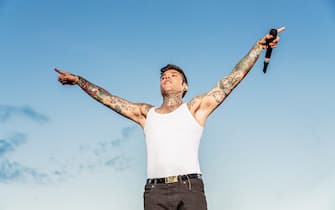 First J-Ax, now Rovazzi and Psalm: it is a period full of “peace made”What he is going through Fedez. The singer in recent months is indeed getting closer to other artists with which in the past he had disagreed

WATCH THE VIDEO: Fedez reveals what we can expect from X Factor 2022

The latest in chronological order is Fabio Rovazzi. The two had left after some misunderstandings, but there peace seems to have returned and is also certified by a story on Instagram published by Fedez

Fedez: “My next project? Helping Rozzano”

In the short video, also shared by Rovazziin fact, we see the two – who for some time would have been reunited – exchange an affectionate kiss on the cheek

The Ferragnez 2, announced a new season of the TV series

Also very fresh rapprochement with Psalm: on the second date of the Flop Tour 2022, the rapper called Fedez on stage. “It’s a game, we never really want each other badly, quite the contrary we get caught and we made peace. Let’s say we became friends, ”he said

Fedez and Salmo on the stage of San Siro: the sketch and peace made

The two had clashed last summer, on the occasion of Salmo’s flash-mob concert in Olbia. Yesterday, during the speech, Fedez took the stage and toasted “happiness”doing pretend to break a bottle on the head to the friend found

A gag studied and prepared at the table (the bottle was on stage), as shown by Fedez himself in another story posted on Instagram

Love MI, in Milan the benefit concert organized by Fedez and J-Ax. PHOTO

In May, however, Fedez had made the most known and awaited peace by fans: the one with J-Ax. After a long and fruitful collaboration, the two separated, but they are four years apart reappeared together in a shot shared on social media

“And here we are, with a little more white hair, two fathers, two husbands and perhaps a little more adults than before, ”they wrote. “We have learned that it’s easy to leave people behind and that instead to put aside pride and return to embrace again even when we have hurt ourselves it takes courage”

A rapprochement came to coincide with a bad period for Fedez: “Life is a strange coincidence, we met again the day Federico found out he had cancer to the pancreas after hearing from the phone a few days earlier after 4 years of silence ”

And at the end of June the peace seal arrived between the two: Fedez and J-Ax in fact performed together on stage in Milanon the occasion of the LOVEMI benefit concert in favor of the Tog-Together To Go Foundation