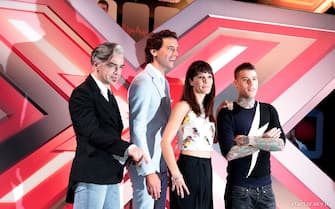 At his debut in 2014, at the age of 24, Fedez was the youngest judge of all the Italian editions of X Factor and, step by step, he earned the affection of the public of the Sky show produced by Fremantle, proving to be competent and ambitious. , with a style that has left its mark, empathetic with the talents in the race and passionate about the path of their children, often present among the protagonists to beat, year after year. Pictured with Morgan, Mika and Victoria Cabello

Fedez returns to the table of judges of X Factor 2022. It is its sixth edition. VIDEO

Fedez plays the role of the judge for the first time in 2014, pictured at the photocall of the most beloved musical talent show on TV together with colleagues Morgan, Mika, Victoria Cabello, and the landlord Alessandro Cattelan

Go to the XF Special

Here is Fedez at his first edition of X Factor together with Lorenzo Fragola while celebrating his victory at the Assago Forum, on 11 December 2014

Fedez (in the photo in a moment of relaxation), is the winner of X Factor 2014 together with his competitor Lorenzo Fragola who wins the top step of the podium.

Lorenzo Fragola, the new single is “Solero” feat. The Kolors

In 2015 Fedez participates in XF together with fellow judges Elio, Skin and Mika. For the first time at X Factor Italia the entire jury is made up of singers. In the photo on the stage with Skin, Mika, Alessandro Cattelan and Elio in the final on 10 December 2015

That edition was won by Giovanni Sada, aka Giosada, competitor of the Over 25 by Elio

Giò Sada aka Gulliver, a journey where Terranova (re) begins

After the triumph of the previous year, Fedez in the 2015 edition of the talent team has the following groups: Urban Stranger (runners-up), Moseek and Landlord

“Non so”, the Urban Strangers single for the first time in Italian!

Fedez to X Factor during the final at the Mediolanum Forum, on 10 December 2015

All the news about XF

Federico Leonardo Lucia (Fedez) with Michael Holbrook Penniman Junior (Mika) during the XF final at the Mediolanum Forum in Assago, on December 10th 2015

Milan 12 September 2016, Fedez at the XF Photocall on the occasion of the press conference with Manuel Agnelli, Alvaro Soler and Arisa, his travel companions of that edition

AX Factor 2016, Fedez brings the talented Gaia Gozzi to the final who wins the second place on the podium. With her in the team Roshelle (Rossella Discolo) and Caterina Cropelli

The following year Fedez is back at the XF11 Photocall together with Levante, Mara Maionchi and Manuel Agnelli

Fedez together with his Under Uomo team on the stage of X Factor 2017 which saw Lorenzo Licitra win after the last clash with the Maneskin and an excited audience for the super guests Tiziano Ferro and Ed Sheeran.

That year the winner is Lorenzo Licitra with In The Name of Love, in the team of Mara Maionchi (in the photo Fedez). The young Sicilian beat the Maneskin, Enrico Nigiotti and Samuel Storm of Fedez’s team in the final

The Måneskin (teamed with Agnelli) give their all by inflaming the Mediolanum Forum in Assago with Chosen, and finishing second on the podium

Fedez at the XF 2018 photocall with Lodo Guenzi, Alessandro Cattelan, Mara Maionchi and Manuel Agnelli at the Linear Ciak Theater on October 22 in Milan. It is the fifth XF of Fedez

Fedez with his Over team made up of Matteo Costanzo, Naomi and Renza Castelli

That year the 4 finalists of # XF12 are Anastasio, Luna, Naomi and the BowLand, all of them split on the stage of the Mediolanum Forum in Assago, but only the first was crowned overall winner of X Factor 2018

After its last edition in 2018, Fedez returned as a guest of a Live in November 2020, bringing on stage the single “Bella storia” (3 platinum records) and to present “Scena Unita”, the fund to support workers in the show, at that moment stopped for months due to the health emergency.

The X Factor 2022 edition is heating up the engines and the first novelty arriving for the next edition is the return of Fedez, one of the names that have made the history of the talent show