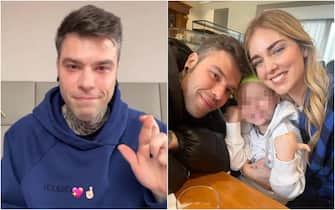 Fedez told on Instagramthrough some stories, of having discovered that you have a disease for which he will have to undergo medical treatment. In addition to his fans, many well-known personalities immediately wrote messages of solidarity for the Milanese rapper. There are also many answers under the post with which the wife asked to send her husband even more support these days

WATCH THE VIDEO: Fedez tells on Instagram that he has a disease

“A hug Chiara… and a special one with all my love for Fedez,” he wrote Mara Venier under the post by Chiara Ferragni

Fedez tells on Instagram that he has an early stage disease

The message of Levant under the post by Chiara Ferragni

Ferragnez family: from the story of Chiara Ferragni and Fedez to the arrival of Leone and Vittoria

Among the messages of closeness, also that of Matteo Salvini

Below Chiara Ferragni’s post, the actress’s messages for Fedez Matilde Gioli and the singer of Negramaro Giuliano Sangiorgi

“We are all with you,” he writes Chiara Biasi

The message of Mara Maionchi under the post by Chiara Ferragni

The message of Antonella Clerici

The message of Paola Perego

The message of Barbara d’urso

“Dear Fedez I have read about your health problems, I am sorry and I hope they will be resolved soon. You are a talented young man, you have a beautiful family and I understand your state of mind in the face of the disease “: with these words Vittorio Feltri begins the letter to the rapper in which he expresses his closeness and confesses that he has cancer.” I’m not able to console you, dear Fedez, but I would like to point out that I do not care about my tumor ic *******. Bad sentence, but true. As long as I’m in the world I’ll fight with anyone, even cancer. ”