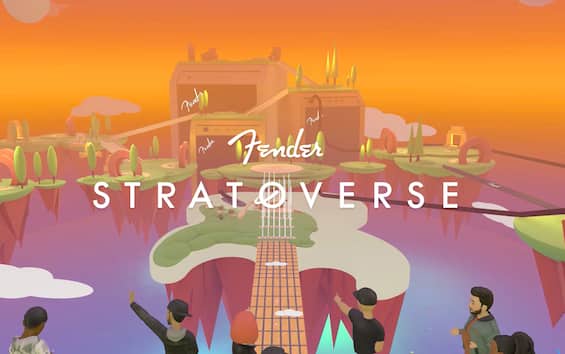 Fender, the historic US brand of musical instruments that is above all synonymous with rock guitars, has entered the metaverse.

The brand started its digital adventure in metaverseannouncing the new collaboration with the colossus of Menlo Park, that is Meta.
The first result of this partnership is called Fender Stratoverse: it is an island that rises in the free online video game in virtual reality Horizon Worlds. It is a Meta platform dedicated to the creation of worlds in the metaverse (there are already more than ten thousand of them).

Clearly shaped like a guitar, the most rock atoll in the world (or rather: in the meta-world) is surrounded by other islets that look like giant amplifiers.
The special island can be accessed using the Meta Quest 2 viewer. Those exploring the Fender Stratoverse will be able to join a treasure hunt with other visitors.

The goal is to find the colored picks hidden on the island. When one is found, the picks can be placed in one of the 18 points of the Riff Maker. By doing so, every explorer of the Fender Stratoverse will be able to add a personal contribution to the riff created by the community, playing their own chord to join the rock choir.
Among the various missions to be carried out, there are explorations of some secret areas, all to be discovered; four special golden picks allow you to record riffs and also to visit new planets, including those that rise in the sky and those that float near the guitar-island.

The words of Fender’s CMO

“We couldn’t be happier to have been invited by Meta to bring Fender to the metaverse for the first time,” said Evan Jones, CMO at Fender. “As a brand we are committed to fostering all forms of musical expression and are excited about the potential this technology has to enable Fender fans and creators to meet, play and create across borders, cultures and from any distance.”

The head of the leader of the rock world underlines how collaboration and experimentation are two ingredients that have made the Fender recipe so delicious.
“Collaboration and experimentation are essential ingredients of the musical journey and we can’t wait to see what creators can do with the unlimited potential of the metaverse and Fender Stratoverse,” added Evan Jones.

Meeting and interaction between users

Fender and Meta join forces to make a chapeau jam session (to put it in music). What this collaboration is aimed at is the interaction between users who love music, in order to make musicians such even in a virtual space, in a parallel world. This first step of the feat. (still to put it in music) between Fender and Meta allows you to explore new sounds, new instruments, new notes and a new type of communication. There mission it is something that the orchestral has: the collective creation of melodies, music, solos, pieces and art.

To explore the Fender Island, search for “Stratoverse” in Horizon Worlds, Meta’s platform dedicated to creating worlds in the metaverse.