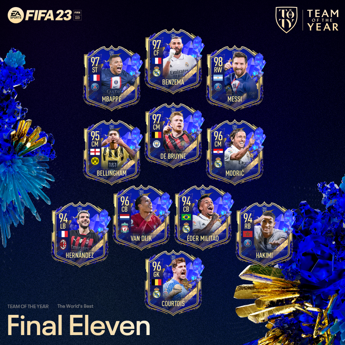 Kylian Mbappé the most voted striker in the EA video game

Electronic Arts has unveiled the FIFA 23 Official Team of the Year (TOTY), voted for by millions of players around the world. Kylian Mbappé had the highest percentage of the vote among forwards with 23%. Kevin De Bruyne had the highest percentage among midfielders with 21%, Achraf Hakimi among defenders with 15% and Thibaut Courtois took first place among goalkeepers with 56%. The complete TOTY lineup will only be available on FIFA 23 starting January 26, while the full XI will arrive on FIFA Online on January 20 and FIFA Mobile in early February. Prior to the arrival of the full squad in FIFA 23, players will have the opportunity to see striker items in-game from January 20-21, midfielder items from January 22-23, and defender and goalkeeper items from January 24-25. .

“The EA SPORTS FIFA Team of the Year vote continues to grow each year in terms of participation and has become a highly respected authority on the best of the best in world football,” said David Jackson, Vice President of Branding EA Sports FC “Team of the Year gives a voice to millions of young football fans who vote for the best in the world and we are privileged to bring their favorite XI to FIFA 23. The full list of players featured in the TOTY is the following.