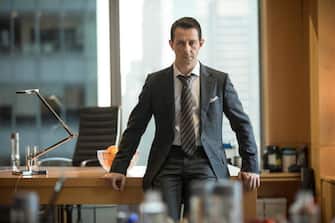 Succession (Sky) The Roy family saga continues to reap success and recognition. Recent nomination for 5 Golden Globes, including the one as best drama TV series, already won in 2020. Succession, now in its third season, tells the story of a family of media magnates, very rich and unscrupulous. Already a cult, highly appreciated by critics and the public, it can be found on demand on Sky and streaming on NOW

WATCH THE VIDEO: Succession, the word to the protagonists

Hawkeye (Disney +) The temporal setting is the right one, Christmas, the location one of the most suggestive for the season, New York. The rest are done by an excellent cast, brilliant writing constantly balancing drama and comedy, spectacular fight scenes. If you like Marvel movies and series, but even if you’ve never seen one, the six episodes of Hawkeye could be for you. On Disney +, also visible with Sky Q and via app with NOW Smart Stick

Hawkeye, the 10 best things from the Marvel TV series

And Just Like That… (Sky) The highly anticipated return of the cast of Sex and the City has become reality. The series, a reboot of the original, which follows the adventures of Carrie Bradshaw and her friends years later, giving some interesting twists, is currently being distributed on Sky and the episodes already broadcast are also recoverable on demand. streaming on NOW. Currently the first four episodes of the ten total are available

And Just Like That …, the best looks of the protagonists

The Paper House part 5 (Netflix) Simply the long-awaited (and at the same time feared by fans) ending to one of the most successful series of recent years. All episodes are already streaming, visible on Netflix and also with Sky Q and via the app with NOW Smart Stick

The house of paper 5 part 2, the cast. PHOTO

Yellowstone 4 (Sky) The fourth season of Yellowstone, a western series with Kevin Costner that tells the saga of the Duttons, a family that owns the largest ranch in the US, arrived on Sky Atlantic and NOW on December 14th. The pace is two episodes a week, on Tuesdays, with the first four already available and the last two scheduled for January 11th. Unmissable

Yellowstone, the trailer for the fourth season. VIDEO

The Witcher 2 (Netflix) Geralt of Rivia is back and resumed his journey among monsters and humans, perhaps even more frightening. With him is Ciri, the young woman who won by claiming the law of surprise after saving Duny’s life. Waiting for them, in a path marked by Geralt’s mourning for the death of his beloved Yennefer, new adventures, new characters, new stories to tell. On Netflix, also visible with Sky Q and via app with NOW Smart Stick

The Witcher 2, the cast of the new season. PHOTO

The Book of Boba Fett (Disney +) Okay, you’ll have to wait a little longer and you won’t find it exactly under the tree, but The Book of Boba Fett, the new series from the universe of Star Wars distributed on Disney + and also visible with Sky Q and via the app with NOW Smart Stick, it will arrive in time for the end of the year. On December 29, to be precise, we will begin to enjoy the adventures of one of the most beloved secondary characters of the Star Wars saga, the mercenary Boba Fett, who we have already found in The Mandalorian

The Book of Boba Fett, new clip from the series

Harlem (Amazon Prime Video) Sex and the City transported to a different social and urban context, in Harlem, a neighborhood in Manhattan closely linked to African American culture. Camille (Meagan Good), Tye (Jerrie Johnson), Quinn (Grace Byers) and Angie (Shoniqua Shandai) are the protagonists; love, sex and career are the themes of a decidedly funny and successful TV series. On Amazon Prime Video, also visible on Sky Q and via app with NOW Smart Stick

Harlem, the trailer for the new Amazon comedy

At Home All Well (Sky) The first TV series by Gabriele Muccino, evolution and expansion of the narrative universe of the 2018 film of the same name, arrived on Sky on Monday 20 December with the broadcast of the first two episodes of the eight overall. They tell the stories, the family and personal events of the Ristuccia family, owners of a starred restaurant, the San Pietro, and of the other part of their family, the Mariani. Between tensions and moments of tenderness, with some escape into thriller and crime

At home all well, the differences between the film and the TV series

Hellbound (Netflix) In Seoul, several people begin to have visions in which a huge face communicates to them the date and time of death by announcing that their soul will go to hell. Punctual as a Swiss watch, a group of giants with enormous arms and fists shows up for the appointment, massacring the victim and dragging his soul towards eternal damnation. The phenomenon is exploited by a religious sect to impose its worldview and expand its influence. Also visible with Sky Q and via app with NOW Smart Stick

Hellbound, trailer for the Netflix series

Gomorrah – Final season (Sky) The epic of Gomorrah is over, but if you have not yet seen the final season (or the previous four), then the Christmas holidays can be an excellent opportunity to close the educational debt and immerse yourself in the product that changed the history of Italian television seriality. Genny and Ciro are there waiting for you

Gomorra – Final season, the farewell of Genny and Ciro to their characters. VIDEO

Arcane (Netflix) Arcane is a complete, innovative, mature series, designed for an adult audience, capable of equally involving the most experienced gamers and those who have never picked up a mouse to compete with League of Legends. Ambitions, politics, technology, crime, grief processing and other traumas coexist in the 9 episodes of a first season that amazed everyone with the quality of the writing and animation. Also visible with Sky Q and via app with NOW Smart Stick

Arcane, official: the second season will be done

Raised by Wolves – A new humanity (Sky) Soon the second season of the TV series produced by Ridley Scott will arrive, the first television foray of the director who in the last period has been very busy at the cinema between The Last Duel And House of Gucci. And then the holidays can be the perfect opportunity to catch up by catching up on the first season. The genre is science fiction, it speaks of men and androids, of religious wars and the struggle for survival. With settings so beautiful they rub your eyes

Aggretsuko 4 (Netflix) The adventures of the world’s most beloved female red panda continue with the fourth season. Retsuko is the employee of a graphic studio, shy and clumsy, dominated by a boss with despotic attitudes, she lets out herself by spending the evenings alone in the rooms of a karaoke to sing heavy metal songs in which she tells all her frustration. Meanwhile, the hyena Haida continues to court her while her friends Gori and Washimi give her advice on her love life. On Netflix and also with Sky Q and via app with NOW Smart Stick

The best TV series to watch in December 2021

Life as a Carlo (Amazon Prime Video) The first TV series by Carlo Verdone tells about his life taking full inspiration from reality. Verdone tells of his daily life upset by the proposal of some friends who would like him to be a candidate for mayor of Rome. He, on the other hand, would just like to make a drama for once. On Amazon Prime Video, also visible on Sky Q and via app with NOW Smart Stick