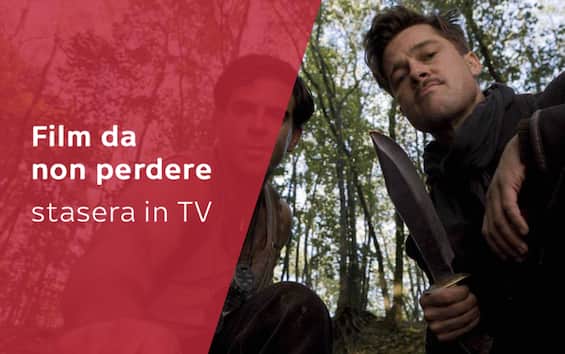 Together for strength, 9.15 pm on Sky Cinema Uno

After the blind date ends disastrously, two single parents are forced to share the same room at a resort with their respective children.

Following the economic crisis, the Apulian town of Monopoli is put to the test. Fortunately, however, Mimì la Petite arrives to awaken the souls of the town thanks to burlesque.

Quentin Tarantino’s masterpiece with Brad Pitt, Christoph Waltz, Michael Fassbender and Diane Kruger. A group of American soldiers of Jewish origin has a special mission: to kill as many Germans as possible.

Yuri Orlov is an opportunistic and unscrupulous businessman who discovers a gold mine during the period from the end of the Cold War to the collapse of the Soviet Union.

A team of blue-collar workers in Texas put their lives at risk to keep the crumbling power grid running during a severe storm that puts the entire country in distress.

The crimes of BarLume – The king of games, 9.15 pm on Sky Cinema Collection

When a car accident causes the death of the son of a press officer of a local politician, four patrons of a village bar are convinced that something else is behind them and begin to investigate.

Wes Wilson is a writer. When his fiancée is kidnapped and presumed to be dead, his life takes an unexpected turn.

the clumsy panda Po and his friends must stop an enemy bent on conquering China and destroying kung fu forever, Lord Shen.

The second season of the talent show hosted by Antonella Clerici returns.

During the Secession War, three unscrupulous adventurers try to take possession of a load of gold that would allow them to end the life of a gunslinger. But the war will force them to change their plans.

Overwhelmed by an unusual fate in the blue sea of ​​August, 9.30 pm on Rete 4

A wealthy Milanese lady hires a sailboat for a ride in the Mediterranean Sea during the summer. But when she is shipwrecked on a desert island with the only company of the rude sailor, her hierarchy of powers is reversed.

Gerry Scotti leads the new edition of the program which will feature men and women from all over the world ready to challenge their limits through spectacular tests.

Clark Kent and Lois Lane come face to face with one of their biggest challenges ever: coping with all the stress, pressures and complexities that come with being working parents in today’s society.

A UN interpreter inadvertently overhears two people talking about a plot to murder someone. A United States Secret Service agent is called to investigate the case

Maggie is terrified of marriage, so much so that on three occasions she has abandoned her future husband on the altar. Her particular case attracts the attention of the journalist Ike, who intends to write a report about her.

While the investigation continues, Denise’s half-sister Jessica is charged with the trial for the kidnapping of the child.