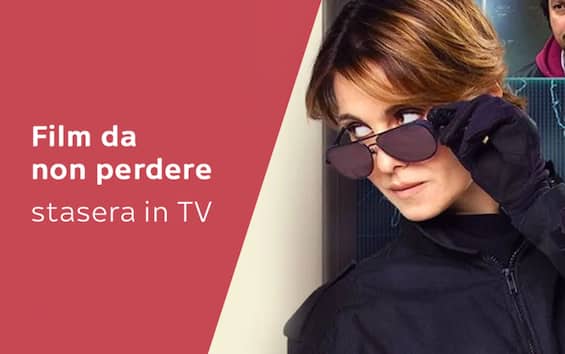 But what does the brain tell us, 9.15 pm on Sky Cinema Collection

Riccardo Milani directs Paola Cortellesi and a super cast in the blockbuster comedy. Giovanna puts her secret agent skills at the service of her friends to avenge them.

Vincenzo Salemme directs and plays a hilarious comedy with an exceptional cast. A surveyor organizes a party for his daughter’s 18 years, but an ‘unexpected’ threatens to ruin everything.

The adventures of Sharkboy and Lavagirl, at 21:00 on Sky Cinema Family

Nathalie Baye and Lyna Khoudri in a film that pays homage to a noble profession. Paris: the head of the Dior tailor shop hires the girl who robbed her on the subway as an intern.

The miracle of Easter in a film with Joseph Fiennes. A Roman tribune investigates the mystery of the disappearance of Jesus’ body to discredit rumors of his Resurrection.

Thriller with Vince Vaughn, Hailee Steinfeld and Bill Paxton. Pursued by gangsters and cops from all over the city, a scammer escapes with her daughter, threatened by a dangerous boss.

Fifth chapter of the survival saga produced by Jason Blum. A group of rebels wants to last forever the insane criminal anarchy of the ‘vent’, in which every crime is condoned.

High speed action with Tom Cruise, Nicole Kidman and Robert Duvall. After an accident, a car driver tries to get back on track with the help of a beautiful neurologist.

Bella Thorne and Patrick Schwarzenegger in a poignant love story. A rare disease prevents Katie from exposing herself to sunlight but she falls madly in love with Charlie in the moonlight.

Documentary on the life of Sophia Loren between public and private

Entertainment program focused on the prevention and acceptance of one’s body.