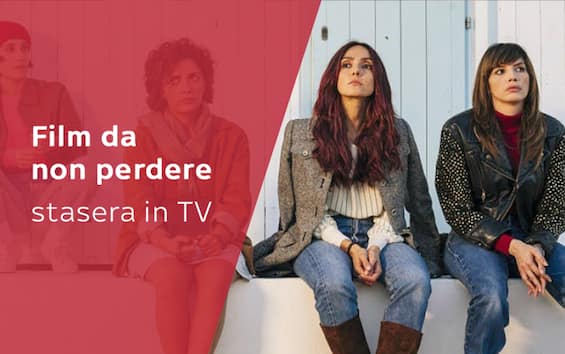 Robert De Niro and Michelle Pfeiffer in a major HBO production directed by Barry Levinson. Bernie Madoff started working as a broker in New York in the 1960s.

Ambra Angiolini, Serena Rossi, Ilenia Pastorelli and Silvia D’Amico in the comedy directed by Michela Andreozzi. Four girls from Gaeta disguise themselves as men to rob a bank.

Penélope Cruz and Antonio Banderas in a comedy about the world of cinema. To make a film, a billionaire hires an eccentric director and two competing stars.

A matter of time, 9.00 pm on Sky Cinema Romance

Domhnall Gleeson and Rachel McAdams in a romantic comedy by Richard Curtis. At 21, Tim discovers he can travel through time and uses this ability to fix his life.

The Chronicles of Riddick, 9.15 pm on Sky Cinema Sci-fi

Vin Diesel in the fantasy-action sequel to “Pitch Black”. On the run from mercenaries who want his skin, Riddick lands on the planet Helion where he becomes embroiled in a feuding war.

In the wake of the immortal cult of the 80s, the exciting martial arts challenges are back with Jackie Chan in the role of the master who once belonged to the legendary Pat Morita.

Action at high altitude. Fired for disobeying an order, a former military pilot finds a job in a civilian company and becomes involved in a rescue mission in Asia.

Thriller with Henry Cavill, Ben Kingsley and Alexandra Daddario. The police and a judge hunt down an elusive serial killer with a multiple personality who lures and kills women.

Lambert Wilson in the biopic on the French general. June, 1940: While his wife and children escape the German advance, Charles De Gaulle flies to London to negotiate with Churchill.

Paolo has been in Germany for twenty years after leaving Puglia following an accident of unknown causes. But now he is forced to return due to his mother’s illness.

The Partita del Cuore is back on Rai 2, where the National Singers challenge Charity Team 45527 in a solidarity competition for the elderly and children with serious illnesses.

Forty-five-year-old Louise leaves for a weekend in Corsica, fed up with her husband’s betrayals. After a night of passion, however, the partner who is with her dies in her sleep.

The in-depth program on society and current affairs of Rete 4 conducted by Veronica Gentili.

For Eva, things get worse and worse: as she gets closer to her husband, the danger for her and for her family increases.

The comedy program signed by Andrea Baccan, aka Pucci.

Growing up in the St. Cloud orphanage, Homer meets a wealthy young couple. The boy joins them and manages to break away from the orphanage environment.

The best of the auditions of the most famous and most loved talent show dedicated to music in the world.

A bachelor, convinced single with a teenage daughter, goes into crisis when the position he wanted in the company is entrusted to a woman.