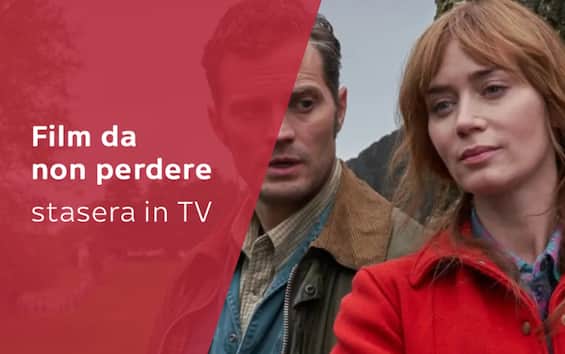 Amy Carr’s life hasn’t been the same since her husband passed away and eldest son Noah still hasn’t recovered from the loss of his father.

The Battle of Hacksaw Ridge, 9.15pm on Sky Cinema Collection

The singular story of Desmond T. Doss who won the medal of honor despite refusing to bear arms during World War II for religious reasons.

Saturn against, 9.15 pm on Sky Cinema Due

A group of friends, after years of carefree, find themselves, on the threshold of forty years, to deal with adulthood and the difficulties of married life.

Luna and Adalberto discover they are expecting a child, the boy finds himself forced by the situation to introduce his girlfriend to his parents and relatives.

A restless war veteran takes on the identity of another man. The murder of a prostitute forces him to face the ghosts of his past.

Ten years have passed since the facts recounted in “The Silence of the Lambs”. FBI agent Clarice Starling is back in the media spotlight again.

The scent of wild grass, 9.00 pm on Sky Cinema Romance

Since early childhood, Rosemary is secretly in love with her neighbor Anthony, a shy dreamer who doesn’t consider her.

Heartbroken by her beloved Gideon, the brave Gwen faces another series of fantastic time travel, coming to a shocking discovery about her origins.

The historic program of in-depth study and scientific dissemination, conducted by Piero Angela, in one of his latest appearances on TV.

After having contributed, with great ability and courage, to the solution of the case involving the Jamaican Police, another difficult test awaits both Neville and Florence.

Sandra is a young woman forced to leave the south of France to escape from an abusive husband.

The expropriation of Agata’s land, for Nino and his brother, loses its meaning in the face of the arrival of Franca, Alberto’s mother.

The Hyenas present: Crime of Garlasco: the truth by Alberto Stasi, at 21:20 on Italia 1

Special dedicated to the crime of Garlasco, which focuses on the key moments of the story and on all the anomalies that have emerged so far.

Special Elections by the editorial staff of TgLa7: lead by Paolo Celata and Alessandro De Angelis with Silvia Sciorilli Borrelli.

In recent years, many artists have placed their dreams and hopes on the most famous and most loved musical talent show in the world.

Signals from the future, 21:25 hours on Nove

An astrophysics professor finds a letter written by a girl fifty years ago with the space-time coordinates of where enormous catastrophes will occur.