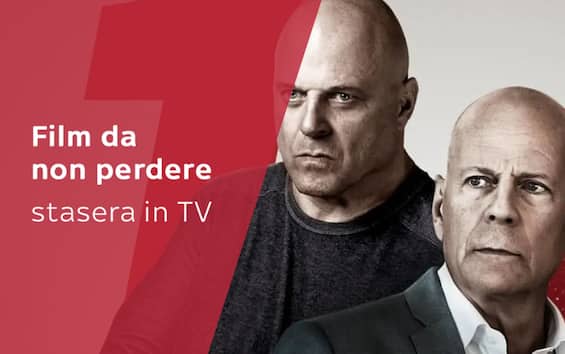 Scratchy comedy by and with Antonio Albanese. A Milanese trader devises a plan to get rid of a Senegalese street vendor who is competing with him.

From the novel by Nicholas Sparks, a romantic film with Benjamin Walker and Teresa Palmer. A vet and a student fall madly in love, but fate has a tragic event in store.

Comedy by and with Sergio Castellitto, Berenice Bejo and Matilda De Angelis. Paris: The monotonous life of a bookstore owner gets a shock thanks to an exuberant actress.

Action with Bruce Willis and Michael Chiklis in pursuit of the truth. After a robbery ended badly, a criminal loses 10 minutes of memory, essential to understand who betrayed him.

Matilda Lutz in the first ‘revenge movie’ directed by a woman. Victim of the abuse of three men, a girl transforms herself from an object of desire into an unscrupulous avenger.

John Woo directs Ben Affleck, from the short story by Philip K. Dick. An engineer, forced to erase his memories at the end of each top secret project, discovers he is the victim of a conspiracy.

Eddie Redmayne, Johnny Depp and Jude Law in the second spin-off of the “Harry Potter” saga, written by JK Rowling. Albus Dumbledore must stop the evil plan of the escaped Grindelwald.

The Irish question in a thriller with Jack O’Connell. Belfast, 1971: after a clash between Catholics and Protestants, a soldier becomes the protagonist of a desperate night escape.

Lambert Wilson in the biopic on the French general. June, 1940: While his wife and children escape the German advance, Charles De Gaulle flies to London to negotiate with Churchill.

35 years old, a son, a villa in Parioli and three servants: Alice has a smooth and perfect life, but when her husband dies in an accident, everything has to change.

The variety show signed by Enrico Brignano, with monologues, music and laughter, as well as ideas for reflecting on society and current events.

A journey between news and current events with Bianca Berlinguer to deepen the current and social issues of the country.

The appointment with the journalist Mario Giordano who addresses the most current issues of politics and news through the most counter-current rumors.

Christian is a scientist, his son a teenager obsessed with video games: the idea of ​​a vacation together in nature sounds like a nightmare, but that’s what will bring them closer.

The weekly appointment with politics and current affairs led by Giovanni Floris.

The adventure capable of combining travel, discovery and entertainment begins, with 10 couples ready to travel between Turkey, Uzbekistan, Jordan and the United Arab Emirates.

The CIA hires the twin brother of a former agent killed in action as an agent to carry out a mission.