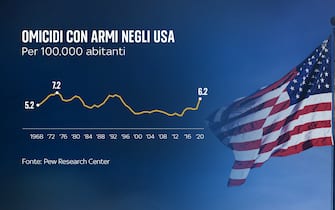 And the 1993 when, under the Clinton administration, the US Congress passes the Brady Bill, the law introducing a series of preventive checks on those who intend to buy weapons. The name derives from James Brady, Ronald Reagan’s press officer who on March 30, 1981 was wounded by bullets fired by John Hinckley Jr at the president. After the law there was an initial drop in casualties, then a subsequent turnaround (in the photo, gun killings in the US)

WATCH THE VIDEO: Texas massacre, the gun control challenge in a divided America

The measure, over the years, shows some gaps. For example, both the trade between private individuals, and those carried out in exhibitions of weapons: about 5 thousand are organized every year in the US and almost half of the purchases are made in this way. He did not even take into account thee-commerce, today decisive for sales. Over the years, the Active Shooterthat is, the killers who deliberately open fire in crowded places to kill as much as possible

Massacre in elementary school in Texas, USA in shock. The debate on weapons is reopened

In the 1994 was approved on ban on assault weapons, proposed 5 years earlier by Bush Sr. The ban was not renewed by Congress in 2004 and then, re-proposed by Obama along with other restrictions after the Sandy Hook massacre, was again rejected in 2013. Trump further loosened arms sales controls, Biden revived the ban on assault rifles (in the graphics, the victims of weapons in 2020)

WATCH THE VIDEO: United States, the question of gun control is back, the point

But in thePolarized America of today, finding an agreement on this issue seems impossible. The arms lobby is strong, but its strength also derives from the support of a large part of the population: many, in fact, see the possession of guns and rifles as one of the ways to exercise their natural distrust of the central government. Thus, in the impossibility of reaching an agreement, the States take decisions in no particular order (in the photo, the weapons used in the massacres in the last 40 years)

The United States I am the only country in the world where, by detachment, there are more domestic weapons than people. These, like the other numbers that follow, are all estimates

US shootings, from Sandy Hook to Uvalde: the worst massacres with firearms. PHOTO

The victims of firearmsper million inhabitants, in different countries

The polarization can also be seen from these numbers: there are American states in which the percentage of possession of weapons is at the Italian or European levels, while there are other states where two out of three families possess at least one weaponlike in Montana

Staying in Montanain the city of Helena – of 32 thousand inhabitants – there are all these physical places where you can buy weapons (plus everything online, plus fairs)

The US states with the most weapons are all republicans

Armed Americans are half Republicans, while the Democrats are 1 in 5

Who manufactures the weapons that American families use? First of all the Americans themselves, but then they are also imported and Italy is among the countries