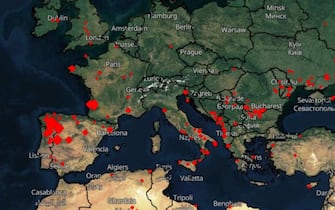 Italy, France and Spain are among the countries that stand the most burning up in these days of record heat accompanied by large fires. But Eastern Europe and states usually less affected by the fires, such as the United Kingdom, are not safe either. This can be seen from the maps developed byEffis (European Forest Fire Information System), where the red symbols represent the fires that broke out between 18 and 19 July

WATCH THE VIDEO: France, fires hit the beach in Gironde

This is the map that shows the risk of fires, released by Copernicus, the Earth observation program of the European Union, for the day of 19 July. Purple indicates extreme risks, red indicates high risks. The most dangerous areas are almost all of Spain, a large part of France and several Italian regions, from the Center to the Islands

Sky Voice, Drought and climate change: what future awaits us? WATCH THE VIDEO

In this map the red symbols indicate the fires erupted in the last 24 hours, the orange ones refer to the last seven days and the blue ones to the last thirty

ITALY – In Italy, it emerges from an elaboration Coldiretti on Effis data, in the first half of July they erupted at least three fires a dayfrom Veneto to Tuscany and up to Rome (in the photo, a fire in the hills of Massarosa, Lucca)

Southwest of Europe burns. THE PHOTOS

“The heat and the absence of rainfall with a devastating drought – underlines Coldiretti – have dried up the land in the most exposed areas at the blaze of the flames ” (in the photo, again the Massarosa fire)

A drama, says Coldiretti, specifying that if on the one hand “six out of ten fires are of arson“On the other” due to the closure of farms, the majority of national woods is found unsupervised due to the absence of a farmer who can manage them “. A complicated situation in a country” where more than a third of the surface, for a total of 11.4 million hectares, is covered by woods ” (in the photo, operations to extinguish a fire in Cosenza)

TO La Teste-de Buch, close to the Arcachon basin, on a perimeter of 9 km by 8 km, about 4200 hectares went up in smoke. It is suspected that the flames started “for a deliberately malicious act”, the technicians of the Prosecutor’s Office said

For the fire that broke out in Landiras law enforcement officers arrested a man, as announced by the Bordeaux prosecutor’s office

SPAIN – The current wave of fires hitting the Spain was defined by the director general of the Iberian Civil Protection, Leonardo Marcos, as “the most important emergency” since it is possible to compile statistics (in the photo, a fire in Galicia)

One of the most worrying fronts of active flames, Marcos said, is the one that concerns the province of Zamora (pictured), from which 5,800 people from 34 urban centers have already been evacuated, according to the Efe news agency

On the evening of July 18, huge fires also hit the region of Galicia (in the picture). Others are registered in Catalonia