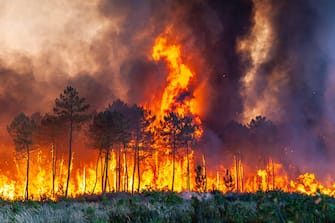 It is a fire emergency in Europe where the flames break out mainly in Spain, Portugal, Greece and France (pictured). Meanwhile, the heat wave shows no sign of abating and Britain prepares to break new high temperature records this week

In Spain, a firefighter was killed on Sunday in a fire in Losacio, in the north-west of the country, where numerous forest fires continue to rage. This was announced by the authorities of the region of Castile and Leon. In the photo, the fires in Galicia

Furthermore the lifeless body of a sheep farmer was found on the mountain engulfed by flames, also in Losacio. The farmer, born in 1952 and originally from Escober de Tabara, left the house yesterday afternoon to take the flock to graze and since then they had lost track. The shepherd may have been surrounded by flames, given the speed with which the fire spread to the area about 4 km from the village of Escober de Tabara. In the photo, the fires in Galicia

Spain is in the grips for 10 days to an extreme heat wave and saw thousands of acres ravaged by flames, with thousands of citizens forced to flee their homes. On Sunday the thermometer reached 39 degrees Celsius in Madrid, 39.7 degrees in Seville and a maximum of 43.4 degrees in Don Benito, near Badajoz. In the photo, the fires in Galicia

Sky Voice, Climate, science has no doubts: the man behind the crisis: WATCH THE VIDEO

In the last few hours the Spanish authorities have registered about 20 fires still out of control in different parts of the country, from the South to Galicia, in the extreme North-West, where the flames destroyed about 4,500 hectares. In the photo, the fires in Galicia

In the photo, rescuers in action in Pont de Vilomara, Spain

In France the situation has deteriorated in the Gironde region (pictured), where firefighters are busy putting out forest fires that have devoured nearly 11,000 hectares since last Tuesday. In the country, over 16,000 people, including residents and tourists, have been evacuated

In the photo, another image from France, Gironde

In the photo, the flames in Louchats, France

In Portugal (pictured) almost the whole country remains on high alert for fires, even if temperatures have dropped slightly after reaching 47 degrees Celsius last Thursday, a record for the month of July. The fires, which killed two people and injured about sixty, destroyed between 12,000 and 15,000 hectares