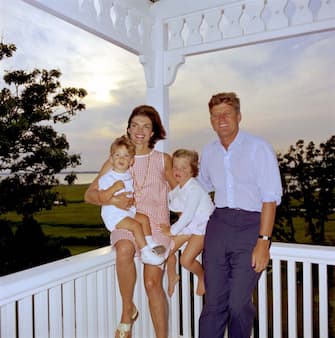 The time of Jackie Kennedy the White House was short: thirty-five tumultuous months that promised a new dawn for America, but were marked by betrayal and public tragedy.

First Ladies, the docu-series that tells the life of the women of the White House. VIDEO

With rarely seen personal letters, photographs and intimate audio recordings, the episode reveals how Jackie took control of JFK’s legacy in the days following his assassination, writing about the “brief shining moment that was known as Camelot.”

First Ladies, the docu-series that tells the life of the women of the White House

First Ladies explore the life of Jackie Kennedyas he took control of President John F. Kennedy’s legacy in the days following his assassination.

Michelle and Barack they were elected on a wave of euphoria, but not everyone shared the excitement of the moment and suffered ferocious attacks.

First Ladies explores the life of Michelle Obama and how she carved out her own legacy while being an essential part of her husband’s presidency.

On November 22, 1963, the assassination of President John F. Kennedy left the presidency to Lyndon Baines Johnson and catapulted his wife Lady Bird in a role she hadn’t prepared for.

The Johnson administration enacted one of the most prolific legislative programs in U.S. history, but it probably would not have been successful without the constant presence of Lady Bird Johnson.

The marriage of Eleanor Roosevelt with Franklin Delano Roosevelt it created arguably the most formidable political partnership in American history.

First Ladies explores how a bleak childhood laid the foundation for a life dedicated to defending the poor and dispossessed.

When Eleanor reached the White Housewas at the forefront of efforts to alleviate the suffering caused by the Great Depression and leader of the civil rights campaign.