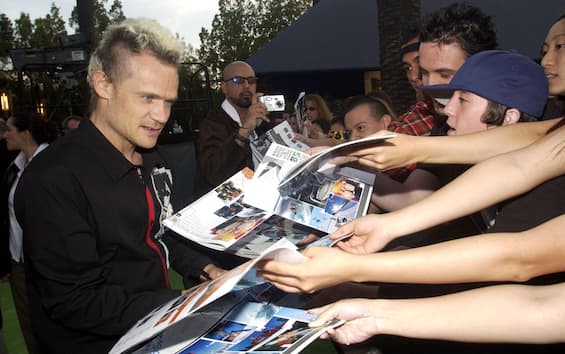 Flea, the famous bassist of the Red Hot Chili Peppers, is usually likeable and easy-going, however he seems to often back down when it comes to taking pictures with fans. He decided once and for all to explain the reasons on Twitter, naturally generating a heated debate …

The one who in the century is Michael Peter Balzary – but who is universally known by the nickname of Flea (which in English means “flea”) – has recently made headlines for a case considered exceptional: an admirer of the group would have been able to chat amiably with him and Anthony Kiedis, the singer, which is why he wanted to thank them on Twitter.

The music magazine was the first to report the genesis of this story Ultimate Classic Rock, who says a fan (who goes by @luke_vesely on Twitter) recently posted a message in which he tags the Red Hot Chili Peppers bassist thanking him. The aforementioned fan was amazed and showed enormous appreciation for having been able to chat with him and the singer (another proverbial rock bear) at one of their concerts.

At the bottom of this article you will find Flea’s tweet in which the bassist explains much of this quarrels social.

The words of the fan of Flea

The Red Hot Chili Peppers fan (@luke_vesely on Twitter) writes on the social network: “@ flea333 thank you (and AK) for being so kind and genuine while you met us. You are both sunshine, you weren’t forced to stop and chat but you did and I hope you know that you have really affected our lives. We love you and AK with all our hearts! ”.

To testify what happened, the aforementioned user of the social network written by the blue bird accompanied the tweet with a short video showing the meeting (which seems to be “close to the third kind”, given the exceptional attention that was given to him, and that we are giving them all).

The reactions of the fans, who say it is a rare thing

That @luke_vesely from Twitter has received several responses from other users of the social network, who almost unanimously point out how rare it is to see Anthony Kiedis talking to fans at a concert.

Luke himself then admitted that it is true, adding that the very exceptionality of the fact made “the encounter with him (Kiedis, ed) and much more special Flea “. He also specified that none of that group of fans” asked for a photo or an autograph or anything else. ” And it is precisely that distinction that prompted Flea to retweet Luke’s post and comment.

Flea is one of the few bass players to be famous as the lead singer of the group in which he plays. Usually, those on the bass are a bit ‘the rear of a group, hoping that the bassists listening – indeed, reading – do not want it … But in truth they also admit it themselves (Paul McCartney a part).
Returning to Flea, the musician wanted to respond to the fan who praised him and Kiedis, tweeting the following: “It’s because you all generated a gentle and gentle light and didn’t ask for a photo. We are always ready to talk and chat, asking for a photo ruins the atmosphere instantly, “said Flea.

The issue broke out on the net

Flea’s words have triggered many reactions of various kinds.

“Of course, his sentiment generated a lot of conversations, with dozens of users reacting (positively and negatively) to Flea’s clarification by sharing their experiences of meeting the quartet (the Red Hot Chili Peppers),” writes Jordan Blum on US music magazine Loudwire.

Flea then offered a deeper insight into his position when one of the Twitter users asked him what would be wrong with fans asking for a photo. “There’s nothing wrong with that. But it ruins a real conversation,” Flea said.

The open question that Blum of Loudwire it is the same as we set ourselves. But it remains open, without any kind of univocal answer.

“Honestly, both sides of the discussion have points right, so what do you think? Should artists agree to take pictures with their admirers, or do they have the right to object sometimes (if not always)? ” Jordan Blum concludes.

There are those who like to remind artists that they owe everything to the fans, who are basically their employers. But there are also those who remember that, however it may be, an artist must not be accountable to anyone. But there are many who turn up their noses: in the end the musicians always give an account to their record company and their manager, so why not do it also with that part of the market to which they owe their high income, that is who buys the records and who do you go to concerts? And he goes to concerts with smartphones firmly in hand because – if Flea had not yet noticed (as does Bob Dylan, who even prevents the use of smartphones during his lives) – today we live in a world in which to grasp the moment with the camera is everything, like it or not. But, in the case of the Red Hot Chili Peppers, we are talking about a band born in the 80s, therefore remained inextricably linked to the analogue also in terms of human relationships, probably. Which is good. But as now the Red Hot Chili Peppers – as well as Dylan – are on Spotify and not only on cassette, CD and vinyl, they should also modernize on the treatment side of their audience. It is part of the game, unfortunately or fortunately.

Below you will find Flea’s tweet in which he explains much of this social controversy.