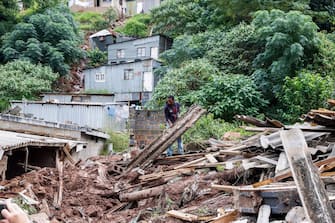 The updated death toll in South Africa rises to 253 due to torrential rains that caused flooding, landslides and floods on the east coast of the country. This was reported by Nomagugu Simelane-Zulu, health representative in the department of the province of Durban

Heavy rain for days caused the flooding of numerous areas and the closure of dozens of city streets, while landslides caused the suspension of railway services throughout the province of KwaZulu-Natal, of which Durban is the largest city.

Storm Megi, floods and deaths in the Philippines. VIDEO

The South African president, Cyril Ramaphosa, traveled to the flood-affected territories today where he met the families of those who died in the port city of Durban. Ramaphosa also met with a family who lost four children in the collapse of a wall on Monday night. “I came to see the damaged area for myself,” Ramaphosa said. “We have seen similar tragedies hit other countries like Mozambique, Zimbabwe, but now we are the ones affected”

President Ramaphosa plans to visit various parts of the region. The province of KwaZulu-Natal, located in the south-east of the country and of which Durban is the largest city, is still struggling to recover from the riots in July (the most violent since the end of apartheid) which resulted in over 350 deaths

South Africa, 30 years ago the referendum that paved the way for the end of apartheid

Today the families of the victims gathered to mourn the death of their loved ones. A moment of remembrance was held at the United Methodist Church of South Africa in Clermont, near Durban, for the deaths of the 4 children who died in the collapse of their home last Monday, April 11

The inhabitants of the province devastated by the floods of the past few days, have now begun to sift through what remains of the destroyed homes in Durban and the surrounding area. The missing people continue to be searched