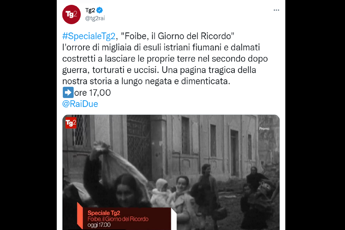 On Remembrance Day, offensive comments and a video of a person urinating in what appears to be a foiba

Outrage among the comments on the post on the Tg2 Twitter account with the announcement of a special on Foibe on the Remembrance Day. Among the reruns of users, there is also a video of a person urinating in a karst cavity and which appears to be a foiba.


“In response to the post on the Tg2 Twitter account announcing the Special on Foibe, alongside other offensive comments an unpleasant video has even been posted in which you can see a person urinating towards a karst cavity which seems to be a Foiba “, declares the director of Tg2 Gennaro Sangiuliano
announcing a lawsuit in this regard: “It is a vulgar gesture that offends not only our work but above all the memory of this huge national tragedy”. Sangiuliano added: “The memory of the Foibe, after a long oblivion, has become shared memory. This is a value of the common identity. exiles “.

Indignation also expressed by the Cdr of the news: “The Editorial Committee condemns the ignoble video inserted in the comments to the tweet on the special of Tg2 dedicated to the Remembrance Day in memory of the martyrs of the sinkholes. A shameful and seriously offensive gesture towards above all the victims but also the work of Tg2” . And the Usigrai executive “joins the condemnation of the Cdr of Tg2 for the ignoble video inserted in the social comments on the Tg2 special dedicated to the day of remembrance in memory of the martyrs of the sinkholes. To the editorial staff of Tg2 the solidarity of the Usigrai executive for an obscene attack that offends the work of colleagues and the national memory “, reads a note.

The condemnation of the political world was also immediate. “Firm condemnation of the outrage that took place on the Tg2 twitter account. Professional haters strike a moment of national unity, also remembered by President Mattarella. Solidarity with Tg2 and the director Sangiuliano. The national tragedy of the sinkholes, we recall, is celebrated as a Day of Remembrance with a state law. We must not leave room for hatred and historical denial, the memory of the exiles and the infoibati is at stake. “Thus the Rai Supervisory Commissioner, Fdi deputy Federico Mollicone.

“The solidarity of Fratelli d’Italia reaches Tg2 and the director Sangiuliano for the shameful outrage to the post on twitter announcing the special on the sinkholes”. This was declared by the deputy group leader in the Senate of the Brothers of Italy, Isabella Rauti. “After almost twenty years from the institution of the Remembrance Day – he underlines – it is unacceptable to witness such acts that offend not only the work of the editorial staff of Tg2 but above all the memory of the tragedy that saw thousands of Italians murdered and inflicted only for be such, without counting the exodus that ensued. Those who foment hatred and denial should put their minds in peace because, thanks to the battle waged by the right and the institution of the Day of Remembrance, today Italians are much more aware of their History”.

“There is no limit to the worst: from negationist conferences to outrages to the Tg2 post on twitter announcing the special on Foibe. That shameful and vulgar insult is not directed only to Tg2, but to the whole of Italy, to our history, to our shared memory, to our identity and to the victims of that ignoble persecution. Ignorance and stupidity often go hand in hand, but this time the threshold of minimal decency has been exceeded: we hope that justice will take its course as soon as possible. In the meantime, we express solidarity with the director Gennaro Sangiuliano and with the whole Tg2 “, says the president of Noi con Italia Maurizio Lupi.

“An outrage that cannot go unnoticed. The offenses to the memory of the victims of the sinkholes that appeared today under a Twitter post on Tg2, on the special dedicated to this painful page of our history, represent a lack of respect for the many deaths of a national tragedy. A gesture that hurts even more today, on the day in which the massacre of thousands of Italian citizens is remembered “, writes the president of Liguria and co-founder of Coraggio Italia in a note. Giovanni Toti. “I therefore express my solidarity with the entire editorial staff of Tg2 and with the director, Gennaro Sangiuliano, for the shameful event that I hope will not repeat itself”

“Solidarity with Tg2 Rai for the unworthy outrage on the sinkholes. The patience of memory and the duty of information is the only answer against this shame”. Like this Filippo Sensi of the Democratic Party on Twitter.

“I express my solidarity and that of Action to the director of Tg2, Gennaro Sangiuliano, and to all the editorial staff of the newspaper for the disgraceful insult received under the post announcing the special on Foibe. A cowardly gesture that scares the memory of those who were killed and those who were persecuted and forced to abandon their land. An equally serious and intimidating gesture towards those who inform by telling one of the darkest pages in the history of Italy “, he declares Carlo Calendaleader of Action.

“A shameful and ignoble attack by some keyboard hater against the special Tg2Post on the Day of Remembrance. Italia Viva condemns this gesture and offers solidarity to the editorial staff of Tg2 and to the director Sangiuliano and above all to the victims of Foibe and their families for the intolerable attempt to tarnish their memory “. Thus the president of the senators of Italia Viva, Davide Faraone.

“I would like to express my solidarity with TG2 Rai and its director, Gennaro Sangiuliano. Our government supported the approval of the law that established the ‘Day of Remembrance’ for the victims of sinkholes because we strongly felt the duty to keep the attention on a painful and tragic story that concerns the entire Italian people. It is unacceptable that someone thinks of contesting the broadcast of a special that tells it “, he writes on Twitter Silvio Berlusconi.