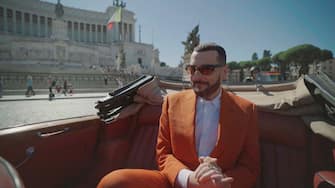 Costantino Della Gherardesca challenges 4 brides over 40. Four strong women who, spring after spring, have been able to maintain their splendor and who with patience and tenacity have gone to get the right man.

The “wedding over” will be judged rigorously by the brides and commented with the classic and irresistible sarcasm by Costantino.

Four Weddings 2022, who won and what happened in the second episode

“After all, it is never too late to say yes”. Costantino not only collects the comments of the brides, but himself comments on weddings with his unmistakable humor.

Four Weddings 2022, who won and what happened in the third episode

From the luxurious villa on the outskirts of Rome, Constantine sitting on a comfortable sofa does not spare himself in any way with sarcastic judgments directed at the brides.

Four Weddings 2022, who won and what happened in the fourth episode

After having participated in all four marriages, they will all arrive before Constantine for the merciless showdown: they will be called to publicly say their vows, justifying them and responding to their respective criticisms and recriminations.

“Hurricane Patti” wants a crazy wedding. At the wedding of Patrizia and Simone the protagonist will be wine, a meeting point between the lands of the two spouses.

Roberta met her him, Antonio at a festival. Their wedding is intimate and fun. Roberta, after 23 years of engagement, has chosen to wear a white dress for her wedding, a choice that has been greatly criticized by her relatives.

The theme of Simona and Andrea’s wedding is the Far West and dinner is inside a saloon.

Stefania met Fabio at a football match, but he was too busy to give her importance. After a short time, Stefania became his game to play for Fabio. Their wedding is elegant and refined.

Simona receives the bonus from Costantino and wins the fifth episode of Quattro Matrimoni. Her unconventional wedding set in the Far West impressed the host very much.